Myrmidon
[view]
“The way you fought... You were brimming with spirit! Hm... Could it be that you fight for something you believe in? I've been doing nothing but chase the money for all these years... But I look at you, and suddenly it feels so meaningless. Hey, I don't suppose you're recruiting? Maybe using my blade for something real and grander than me is just what I need.”
—Chulainn, after being defeated in the Arena

Chulainn is a playable character from Fire Emblem: Genealogy of the Holy War. He will join Sigurd's army after being defeated in the arena present in Chapter 2.

Chulainn is the son of the Lord of Sophara Castle in southern Isaach, and is a former gladiator and descendant of Od.

Chulainn is distantly related to Ayra, who is five years his junior. He is essentially Ayra's male counterpart and bodyguard. According to Chulainn, he developed a crush on Ayra at first sight, having met her when they were adolescents, an event portrayed in the Nattsu Fujimori manga adaptation.

Chulainn will eventually perish in the Battle of Belhalla, alongside several of his fellow comrades.

According to unofficial manga-based sources, Chulainn was born in the Gran Calender year 733 and stands at 185 centimeters in height. He weighs 80 kilograms, and his blood type is A.

A wandering warrior, Chulainn is a man who abandoned the strings and attachments of nobility to live his life free as a gladiator, making his living by crushing his opponents in the arenas of Jugdral. However, he is shown to be somewhat weary of this wayward and nomadic lifestyle, as he laments in his recruitment conversation that it feels like simply fighting for money has become a hollow cause and that he wishes to fight for something greater, leading him to join Sigurd's army.

Due to his nature as enthusiastic fighter, Chulainn has a love for combat, boasting that he's never been defeated before and admiring the "spirit" of other combatants. Ultimately, Chulainn's love of fighting both leads him to shirk his noble duties, but also eventually encourages him to seek for a true and just cause to lend his blade to.

To recruit Chulainn, the player is required to clear the arena in Evans castle at any time in Chapter 2 with any non-bow wielding character. Chulainn will be the final enemy in the arena and will join the army upon defeat.

Chulainn is the second Myrmidon that you obtain in Genealogy of the Holy War. Like Ayra, he is a very competent Boss killer and an offensive powerhouse due to his high Strength, Skill, and Speed as well as his Luna skill. Also like Ayra, he comes with a major problem: his low Movement. In Genealogy of the Holy War, maps are very large and half of your army is made up of mounted units that have twice as much mobility as your foot units. This often means your mounted units will have cleared out the enemy before your foot units reach the action. Although you can choose to have your mounted units wait for your foot units so they strike as one, this can result in items being lost to burnt villages as well as recruitable characters dying. If you like Chulainn, you could negate this weakness by giving him the Leg Ring from Chapter 3 to increase his movement to 9, but this item is highly coveted and most players tend to prefer to give it to Sigurd, Sylvia, Erinys, or their favorite mounted unit.

Should Chulainn be used on the frontline, he will do quite well. Although Chulainn may not be quite as deadly as Ayra, he is a more reliable frontline fighter. While Ayra generally has a few more points of Speed than Chulainn and thus slightly better Evasion, he winds up with a lot more HP and a few more points of Defense. So while her offense is significantly better and her Evasion is slightly better, Chulainn has similar Evasion levels while being significantly better at actually taking hits.

All things considered, Chulainn is a great foot unit and his main problem is actually getting him into the fray. Though many players may overlook him due to Ayra's superior offense, he is very strong and maintains his own advantages.

Chulainn makes a pretty good father as he is actually tied with Lewyn for the best overall growths of all potential male suitors (owed largely to his very high HP and Skill growths) and the second best growths of any character in the first generation (losing only to Sigurd). He also has Holy Blood. He does, however, come with two notable flaws: his Pursuit skill cannot be passed to his children as it is a class skill and not an innate skill, which means that Luna is the only skill he can actually pass on to his children. Further complicating his pairings is the fact that the Luna skill can only be passed on to children who are infantry-type classes (those children being Larcei, Scáthach, Lene, and Patty). So because many pairings result in him passing on no skills at all (and possibly no weapons to boot), Chulainn winds up with a narrow selection of good brides.

Chulainn is best paired with Ayra or Brigid, and can be alright with Sylvia. Edain, Erinys, Tailtiu, and Lachesis should be avoided due to no skills being passed on, no weapons to pass on, or his growths being a bad fit for Magic-oriented children.

In Chapter 3, if neither Ayra nor Chulainn has a lover, Chulainn may speak to her, resulting in her receiving a Brave Sword and 100 love points with him.

In Chapter 5, after Phinora Castle is captured, if Chulainn and Ayra are lovers, Ayra may speak to Chulainn, but nothing will result of it. He reveals that he is from Sophara Castle in Isaach and that they had first met as children, with him being in love with her ever since.

“Heh... I'm such a fool...”
—Chulainn's death quote in Genealogy of the Holy War

Chulainn is illustrated in the trading card game Fire Emblem Cipher with the following cards: 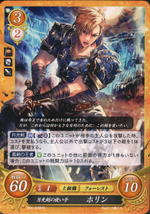 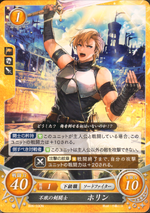 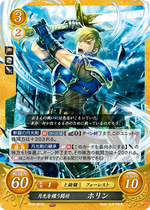 Chulainn refers to a figure in the legend of Cú Chulainn, a legendary hero in Irish mythology. Culann was a smith and the owner of the guard dog who attacked and was killed by Setanta, the future Cú Chulainn. Setanta swore to be Culann's hound and guard in the dog's place until a new one could be reared, earning him his more famous name (Cú Chulainn is Irish for "hound of Culann").

Chulainn's Japanese name, Holyn, is a corruption of Chulainn.