Ten Elites
Those Who Slither in the Dark
[view]

The Church of Seiros (セイロス聖教会 Seirosu-seikyōkai), also called the Central Church, is a religious organization in Fire Emblem: Three Houses. Its headquarters is Garreg Mach Monastery in the Oghma Mountains of central Fódlan, a neutral territory that is also home to the Officers Academy. A neutral power, they maintain peace around the continent by keeping the other three nations in check.

The greatest religious power of Fódlan, the Church is split into various regional branches throughout Fódlan:

The Central Church
The major power, overseen by the archbishop. Several times it has been forced to forcibly act out against the other branches to bring them in line with what they consider the correct worship.

The Eastern Church
Operating within the Alliance, it's the weakest branch and doesn't even hold much in the way of an official military force, relying on the Central Church in such matters.

The Western Church
Operating on the Holy Kingdom, it possesses a sizable military force of its own and in the present day starts a small-scale civil war with the Central Church over proper worship of the goddess, among other issues.

The Southern Church
Formerly operating on the Empire in the capital of Enbarr, about 120 years before the events of the game, they had a massive insurrection that resulted in the bishop being exiled by the emperor and the branch disbanded.

Despite not being a nation in and of themselves, the Church's military arm, the Knights of Seiros, is usually tasked with suppressing bandits and providing military support to other territories, but acts independently of any of the nations' wills and responding only to the Archbishop.

There are high-ranking Cardinals alongside the Archbishop and bishops, but their identities are a closely guarded secret. The only known Cardinal is Aelfric. The Cardinals' Room, which can be entered during the War Phase, has many chairs for a supposed meeting of the Cardinals, but it's never seen being used for that purpose.

All initiates to high office in the church, which include the Cardinals, undergo a secret rite in which one pledges to serve the goddess and in return, receives a Crest Stone fragment and blood.

While the church is mostly benevolent, with several people such as Marianne and Mercedes speaking highly of the organization, some members even within the Central Church express some form of prejudice, as it's stated that Dedue wasn't only not allowed to help in security for the mausoleum, is treated with suspicion during Flayn's kidnapping because he was from Duscur. Lorenz claims at one point that church tenets preach against open relations with foreign nations.

The Church's founder and namesake, Saint Seiros, was said to have been given a revelation, a "gift to help guide the lost", from the Goddess who was watching over Fódlan. Seiros first appeared in the Enbarr region of Fódlan 41 years before the founding of the Adrestian Empire. She performed miracles that inspired the people, and the Church of Seiros was founded to venerate her.

The Adrestian Empire was founded in Imperial Year 0 by Great Emperor Wilhelm I, with Enbarr chosen as its capital due to the presence of Seiros. In Imperial Year 32, Wilhelm I launched the War of Heroes with the goal of conquering all of Fódlan for the Empire. Nemesis, the King of Liberation, united the Empire's opponents under his leadership. Seiros finally slew Nemesis at the Battle of Tailtean in Imperial Year 91, but the war did not end until 98, when Wilhelm I's successor, Lycaon I, succumbed to illness.

In Imperial Year 185, Garreg Mach Monastery was completed. Shortly after, Seiros and the Four Apostles attempted the Rite of Rising to resurrect the Goddess, but the ritual failed and the chalice used to preform the ritual was sealed away.

In Imperial Year 751, the Holy Kingdom of Faerghus seceded from the Empire after winning the War of the Eagle and Lion. The Church crowned Faerghus's first king, Loog of House Blaiddyd, and granted his nation autonomy. In 801, the region of Leicester rebelled against the Empire, and the Kingdom took the opportunity to occupy the region. In 861, the death of King Klaus I led his three sons to partition the Kingdom into three parts, with each of them ruling a certain part as an archduke. The death of the archduke of Leicester in 881 gave the Leicester lords the chance to form an alliance rather than accept his heir, sparking the Crescent Moon War. In 901, the war ended with the founding of the Leicester Alliance under the leadership of the influential Duke of Riegan. The constant threat of invasion from countries surrounding the continent eventually forced these three powers to band together under the Church.

In the present era, the three nations exist in relative peace and equilibrium, largely thanks to the mediating influence of the Church and the efforts of Archbishop Rhea. The Church also runs the Officers Academy, which trains the royalty and nobility of Fódlan in the arts of warfare, magic, and leadership.

Throughout 1180, the Central Church came under attack by a conspiracy involving the Western Church, a cult known as "those who slither in the dark," and a masked individual called the Flame Emperor. The Knights of Seiros crushed the Western Church, purged the, so called "heretic apostates", and replaced them with new clergy loyal to the Central branch.

At the end of 1180, the Flame Emperor was unmasked as newly crowned Adrestian Emperor Edelgard von Hresvelg, who blamed the Church for propagating the Crest-based society that led to her siblings being killed in experiments that imbued her with the Crest of Flames. She formally declared war on the Church and launched an invasion of Garreg Mach, which she had been organizing for much of her time enrolled in the Officer's Academy. Edelgard's invasion of Garreg Mach Monastery was a success, opening the path for her to make great strides in her conquest during the five years that pass in-between the Academy Phase and the War Phase.

During the same year, Aelfric, the overseer of Abyss, hatched a scheme to preform the Rite of Rising in an attempt to bring back Sitri using the Chalice of Beginnings. This was done while the Knights of Seiros were dealing with the Western Church, leaving Garreg Mach less defended than usual. The resurrection failed resulting in the death of Aelfric and the creation of an Umbral Beast.

Should Byleth side with Edelgard, as the new empress of the Adrestian Empire, she officially declares war on the Church. Rhea flees from the monastery with her members to Fhirdiad, where the Holy Kingdom of Faerghus granted them asylum and forged a military alliance against the Empire.

The Church is locked in a five-year stalemate with the Empire and Leicester Alliance. During this time, Rhea becomes increasingly unhinged at what she perceives to be Byleth's betrayal and vows to get her mother back, causing several members of the Church to desert to the Empire, realizing the truth behind Edelgard's ideals. After the Empire conquered Leicester, the Knights of Seiros launched a counterattack in an attempt to retake Garreg Mach Monastery but were repelled.

Eventually, the Black Eagle Strike Force arrives at Fhirdiad where Rhea orders the city to be torched and transforms into The Immaculate One in a last attempt to wipe out Imperial forces. She is killed in the ensuing battle, allowing the Empire to annex Kingdom territory and bring an end to Church dominance over Fódlan. Edelgard then has the Church reformed under the Empire following the conclusion of the war.

In the other routes, Byleth remains loyal to the Church and assists Rhea and the others in repulsing an attack from the Empire, who have officially declared war on the Church. Rhea is captured in the ensuing battle and is imprisoned in an undisclosed area, severely weakened, and the Knights of Seiros scattered to the four winds to find her and the missing Byleth.

In 1185, Byleth awoke from a five-year coma and returned to Garreg Mach Monastery. Once word of their return reached the remnants of the Church, Rhea's former second-in-command Seteth rallied them, returned to the monastery, and joined Byleth to help form a Resistance (Silver Snow)/Kingdom (Azure Moon)/Alliance (Verdant Wind) Army. With the Church lending military support to Byleth throughout the conflict with the Empire, Byleth and their associates are able to push back the Empire and kill Edelgard, learning of Rhea's whereabouts in the process. Afterwards, the Church helped restore order to Fódlan and reformed the policies that led to Edelgard declaring war in the first place.

In the Azure Moon route, Rhea steps down as Archbishop, naming Byleth as her successor before retiring to Zanado.

In the Silver Snow route, if Rhea had an A-Support with Byleth, then she steps down, though her successor is not named. Should they achieve an S-Support instead, then she recovers from her ordeal and helps rebuild Fódlan with Byleth.

In the event of an A-Rank and in the Verdant Wind route, it is implied that Seteth reforms the Church in Rhea's absence. 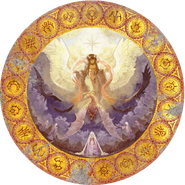