Alexis Tipton
[view]
“I am Clair. The young man may address me as 'Lady Clair', or 'milady'.”
—Clair in Echoes: Shadows of Valentia

Clair is a playable character from Fire Emblem Gaiden and its remake, Fire Emblem Echoes: Shadows of Valentia.

Clair is a Pegasus Knight of Zofia and the younger sister of Clive and a childhood friend of Fernand. Despite resistance, Clair joined the Deliverance, she was accepted as a knight after she asked her father permission to fight alongside her brother. However, she was captured by Desaix's men and was held captive until Alm and Lukas rescued her. Clair rejoined the Deliverance and fought alongside her brother and the group to overthrow Desaix.

She is shown to have a small crush on Alm in Gaiden, joking that Alm was the one she really wanted when Gray won her over. In Shadows of Valentia, Clair and Alm's relationship is expanded and generally portrayed as platonic on Alm's end. She backs off once she witnesses how close Alm and Celica are. The two become very close friends as the game progresses.

Throughout the game, Clair is courted by both Gray and Tobin, causing some rifts between the two friends. Ultimately, Clair chooses to wed Gray after the events of the war.

A headstrong and fearless young noblewoman, Clair has an overbearing nature, which is her one big flaw, not that she pays it any mind. She is also a cheery and sociable individual who loves to interact with any and everyone. She values her impression on others and speaks in an extremely formal and often eccentric manner. In the past, she was somewhat childish and impetuous, and while she has matured since then because of the war, she misses the carefree days of the past.

Being a noble, before the war Clair doesn’t have much of an opportunity to interact with the more common people of Zofia. As a result, she rather desperately wants to know more about other aspects of common daily life. Despite her interest and efforts, her highborn demeanor always shows up contrasting with the simpler habits of the common folk.

She is very close to Clive, and despite being overprotective over her brother initially opposing Mathilda's attempts to get closer to Clive, Clair respects Mathilda, admiring her skill in battle and addressing her as "Lady Mathilda."

She is shown to initially be baffled by Gray's attitudes, calling his "love at first sight" for her shallow, and his courting behavior inappropriate. Later when she grows to know him better, she decides to give him a chance upon noticing that after the whole war his feelings stayed. If Gray dies in battle, Clair is heartbroken and never marries; in Echoes, if he lives but his best friend Tobin is the one who dies, she helps him get back on his feet and they marry.

Clair can be found in a jail cell in the first fort you encounter in the game. Talk to her to recruit her.

Clair is a classic case of a character that starts out weak, but after a few levels they wind upholding their own and eventually wind up being great units. This is commonly the case with Pegasus Knights, and Clair is no exception. She starts off doing low damage and you will need to feed her experience for a few levels before she comes up to the task. She will, however, inevitably end up with very low Defense, so it might be a good idea to give her a Javelin.

When considering all of the Pegasus Knights in Gaiden, Clair is very agile but fragile. Catria and Est are both strong all-rounders whose balance between Speed and Strength usually makes them the most offensively potent, and Palla is strong and durable but slow for a Pegasus Knight. However, while the Whitewing sisters are among the best units in the game as a whole, they are limited to Celica's party. For Alm, she is the sole Pegasus Knight among his forces, thus making her a valuable addition, especially since when she promotes, she is one of two of his forces that naturally combat and deal effect damage against monsters on his team, the other being Silque.

* DLC class; access with the Altar of the Sorceress.

Clair serves as Alm's only Pegasus Knight unless Faye reclasses into one, making her useful in flying over terrain and taking out hard to reach enemies that other units in the army cannot reach in the same amount of time. Her low base stats makes her initially fragile when used, but her high-Speed growths allow her to dish out decent damage through her double attacks in later Levels. This makes her a great candidate for Ridersbane as she can easily dispatch most cavalier units in a single round and benefit from the bonus damage. Promoting her into a Falcon Knight also allows her to deal with Terrors, though they are much more scarce in Alm's route than in Celica's.

Despite her strengths, Clair is incredibly fragile and can be felled by enemies if she cannot finish them off herself. Her Strength is mediocre at best, which is why she is best off using weapons that give her bonus damage against specific unit types. It takes Clair some time to gain levels to Promote, but the time spent on Clair can be beneficial in the long run.

Clair is among many lance flying units and she struggles due to her low Atk compared to nearly all of her other unit counterparts, many of whom were introduced long before her from the start of Heroes. At 42 Base Atk, she can fail to damage an enemy with even mediocre Def, even though she has the respectable Spd to double attack a decent portion of units, especially if she holds an Asset in it. Clair greatly values having an Asset in Atk more, however, as it will bring her base Atk to 46 since it is a Super Asset, which is more managable and in line with many other units. Her Res is also high so she can bait out some mages and dragons if needed. Clair struggles to define a niche among her competitors, but has some merit in her base kit alone. Aside from her low Atk, her physical bulk is also quite low, preventing her from dueling many units without taking significant damage in return.

Clair defaulted with a Silver Lance, a non-effect, raw high Mt lance, but she later received her own personal weapon Rhomphaia. Not only is it a point higher in Mt than her Silver Lance, but it also deals effective damage against Cavalry and Armored units, both of whom are common Arena units. With its refine, it grants a Flashing Blade effect, making good usage of her naturally high Spd to accelerate her cooldowns so long as her Spd is higher than her opponents. At neutral 36, there are enough units whom she can fulfill the requirement over, especially against Armor units.

Harsh Command will flip any penalties inflicted onto her allies into a bonus, allowing her to help allies who are susceptible to certain skills like Ploys and Panics. Hit and Run is an excellent Skill B for all Flying units as it allows her to attack and retreat after poking enemies, that way allies can pull her out of danger. This skill makes her a valuable unit for skill inheritance as her many flying allies also benefit from this skill. Spur Speed is a decent Skill C as it allows her to boost her adjacent allies Spd during combat, regardless of their unit type.

Clair is easily walled off by units with decent bulk and sometimes even fails to kill some Red units in a single round of combat due to her low Atk. Green units are practically untouchable and can likely smash right through her low bulk. As a flier, she is susceptible to Bow units of all types who are likely to kill her in a single shot through her aforementioned low Def. Merric with Excalibur can easily tear through her with color advantage, despite her good Res, thanks to the tome's flying effectiveness and if he is running Close Counter, she has no options do dispatch him.

Clair can either stick with her Rhomphaia or inherit a Firesweep Lance as those two are her most viable options. In either case her skill inheritance suggestions remain consistent aside from her Skil A choice. Reposition is a far superior Support Skill to make usage of her superior mobility as a Flier. Iceberg uses her naturally solid Res for some decent damage boosts. She can also run Ploy skills, either Speed Ploy or Defense Ploy to score the necessary doubles she needs over fast Red units or to grant her more damage against those she already beats in Spd.

If using Rhomphaia, Swift Sparrow provides both an Atk and Spd boost to maximize her offensive stats when initiating combat as she is better off starting it that trying to bait non-dragons. Fury also provides a flat boost to her stats and allows her to bring herself into Desperation range as it is a good alternative for her Hit and Run. If running Firesweep, Life and Death provides a higher offensive boost at the cost of lower defensive stats, but since she is not going to be counter attacked when she initiates, the sacrifice is not nearly as costly.

(If Gray is alive)
"She gave into Gray's persistence and reluctantly got together with him.
"Awww, it was Alm who I really liked..."

(If Gray is alive)
As a knight of the One Kingdom, Clair worked hard on behalf of the continent. In time, Gray's tenacity won her over, and she became his wife and then a mother. But Clair never stayed grounded—she and her pegasus continued to race across the sky, gawkers be damned.

(If Gray is dead)
Gray's death left Clair feeling betrayed and alone, but she joined the knights of the One Kingdom and contributed greatly to their growth. The people were enamored with her melancholy beauty, which was a splash of color amidst the mostly dour men of the Brotherhood.

Clair is illustrated in the trading card game Fire Emblem Cipher with the following cards: 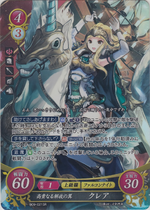 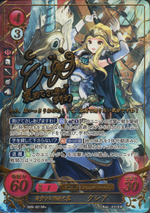 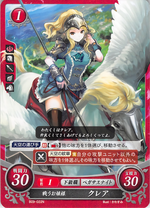 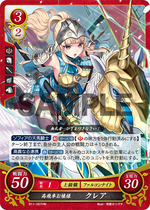 Clair, or Claire, is a given name of Latin/Viking origin via French; the name could mean "clear" or "famous". The word still means clear in French in its feminine form.