Clarine is the younger daughter of Pent and Louise. She had a sheltered life, with few contact with the world outside the nobility set. Despite living in luxury and being very spoiled, she always felt extreme boredom, and so she decided to run away home to encounter her older brother, Klein, who was serving the nation as a general, far away. During the journey, she was captured by Erik, who lured her, pretending to help her in reuniting with her brother, but actually intended to make her a prisoner and give her to Narcian.

Clarine didn't react well to her capture. In the prison, she screamed at her kidnapper in a condescending manner, putting her own life at risk. By luck, she is released by Rutger and thereafter can be recruited by Roy, joining his army to protect her own life.

Clarine is an arrogant and very pampered girl who often looks down at others because of her status. However, this comes from alienation, inexperience and childishness, rather than outright malice. She is close to her older brother, Klein, whom she sees as the perfect noble man. She looks up to and considers him very attractive.

She showed to be bored by her sheltered life as an extremely rich noble, feeling like a doll, tired of doing nothing all day other than dressing up, resulting on her leaving home to search news horizons. As Clarine matured during the war, she was accepting with the possibility of seeing her parents again, but was sad with the perspective of returning to the hollow lifestyle. Despite keeping the spoiled traits in her personality, she developed the desire to pursue the career of a general like Cecilia, but the aspiration is short lived, as in the end she returned to the same highborn life she had prior, possibily to fulfill the duties that were required of her.

Clarine is a mounted healer, and the second healer to join your party. Her staff rank, unfortunately, starts at a low rank of D, giving her some issues in reaching high level staves without grinding. It is also not helped by her low Magic growth and base. However, she is overall a better healer than Elen because she is mounted, which provides her with more movement and rescuing capabilities. Her competition versus Saul remains stiff since he has better Magic throughout the game, as well as his higher base Staff rank and level, but with her mount, in the end it comes down to personal preference. That being said, Clarine has an impressive Speed Growth. If one continues to level her up, she'll be able to dodge most attacks with ease. When you promote her into a Valkyrie, she won't do much damage but she's better off as a support unit rather than an offensive one. 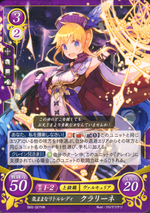 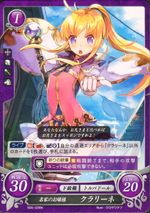 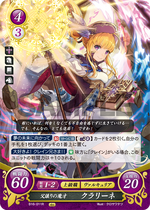 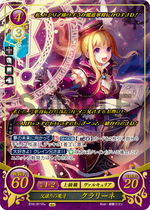 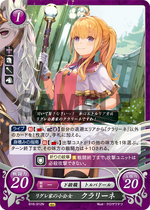 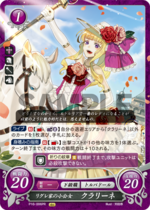 Clarine is derived from the musical intrument clarinet, and also a latin variation of the name Claire, which means "bright, illutrious". In some versions of Arthurian legends, Queen Clarine is the mother of Lancelote.