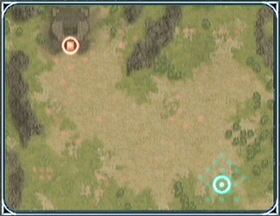 Chapter script
[view]
“In a valley amidst the Marhaut Range, Ike and company are reunited with King Caineghis of Gallia. King Tibarn of Phoenicis also arrives, and brings with him a disturbing tale... His words serve notice: There is no time to waste. The final showdown with Ashnard is coming. Between the forces King Caineghis grants them before returning home and the soldiers King Tibarn brings, the Crimean army possesses three times the fighting power that it did when it left Begnion. Even so, the Daein forces encamped in the capital are strong, rested, and comparable in number. In addition, the road to the final confrontation is blocked by two formidable obstacles-- Fort Pinell and Nados Castle. How these two tests are faced will mightily affect the course of the war.”
—Opening Narration

Clash! is Chapter 26 of Fire Emblem: Path of Radiance and it is the chapter that allows the player to bring out the most units in this game (19). It is also the first appearance of Elincia in battle. This is the siege of Fort Pinell and the place where Bertram is defeated.

As Soren says at the beginning of the battle, the Daein army is twice as large as your own army. Luckily for you, the Daein army has grouped most of its units together, i.e. Wyvern Lords, Paladins, Swordmasters, Generals, even Feral Ones in different groups. Reinforcements will appear in several waves: the Wyvern Lords from the northeast at the end of turn 3, then three Sages with either A-level magic or long-ranged magic and so on.

Once the path is clear, go out and attack Bertram with magic-users because he will be using the Runesword. However be careful of his spear because it does not do magic damage and your magic users will die easily.

Bonus experience is earned if the chapter is completed in 13 turns.