Ymir (If requirements were met in Chapter 20x, FE11 only)

Chapter script
[view]
“Grust would harry the League no more. Marth led his forces on to Macedon. However, Macedon's Dragoons were ready to waylay them at the border; countless reinforcements hovered within the fortresses, waiting to strike... Would Marth be able to lead the League safely through the gauntlet?”
—Opening Narration

Clash in Macedon (Clash in Medon in the European version) is Chapter 21 of Fire Emblem: Shadow Dragon.

This chapter was cut from Fire Emblem: Mystery of the Emblem. It is filled with powerful enemies. At first 3 generals and a sniper, and right near the boss, 5 paladins and 2 mages.

This chapter can present a difficulty curve for some players. Many of the enemy units and reinforcements are high in defense and armed with weaponry that can be deadly to a misplaced unit. Most enemies have Silver weaponry equipped, but some have Dragonpikes and Ridersbane, so be especially careful when placing units like Tiki who are relatively fragile at this point in the game. Be cautious not to send in your Cavaliers blindly, as they can be swarmed by the Paladins and Knights that front the enemy line despite their balanced stats.

It is recommended to play this chapter defensively rather than offensively.

The best strategy in the opening turns is to bait the high movement Paladins with a tanky Knight like Draug by placing your tank at the last square of their movement range. Eventually, flying reinforcements will spawn and try to rush your party, but if you keep your units to the bottom of the map and wait just outside of their range, you should survive. Be sure to use the southernmost Battle Save when it is clear of enemies, and the second one at your discretion.

Keep effective healers nearby to tend to the heavy blows the enemy can deal, and consider using a Ballistician like Jake (equipped with Arrowspate) to pick off dangerous fliers before they can get too close.

Another strategy that is more situational, is to position one or two strong units on the sides to take out their side troops, while having a general or knight bait out the troops to swarm them with the group of placement spots in the center. This is of course, assuming you have leveled up enough troops to fight on three fronts. The upside is this can be done rather quickly if it is done properly. 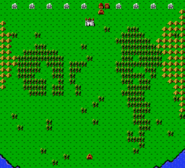