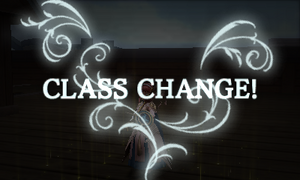 It is also often called "Promotion".

Most class changes have at least some of the following effects:

Throughout the series there have been several methods of initiating class changes.

The original method of initiating class change. There are several items in the game world which will class change a character if they use them, but they only work on certain classes. For example, Fire Emblem 7's Elysian Whip will let Pegasus Knights and Wyvern Riders class change, but not any other classes. This method returns in Three Houses when a unit reaches a certain level to qualify for a given Beginner, Intermediate, Advanced or Master Class (or to access the Dark Mage and Dark Bishop classes).

This is the most common method of class change. It is the same as the multiple item style, except only the one item is used for promotions. In Fire Emblem 5, this item is the Knight Proof. In Fire Emblem 7, this is the Earth Seal. In Fire Emblems 8 - 14, it is the Master Seal (although for FE10, an additional two items are added, for those wishing to promote second-tier units: the Master Crown, and the Holy Crown, used exclusively for one character in particular to promote her to final tier: Mist).

In Fire Emblem 2, in order to class change, a character must visit one of several Shrines spread throughout the world map.

Compared to the item-based systems, this has the advantage in that potentially every character can be promoted, whereas with item-based systems promotions are limited to the amount of promotion items you can obtain. On the other hand, a unit cannot promote at any time like it can in an item-based system - one first needs to go to a map which contains a shrine.

In Fire Emblem 4, a character must enter the Home Castle and choose an option in the castle menu in order to change class.

This has an advantage over the Shrine style of locative class changing in that there is a home castle on every map. However, due to the size of FE4's maps, it can take some time for a unit to reach it, unless one of the teleportation staves is used.

This style of Class Change is used in Fire Emblem 9 and 10, but only in the localized versions- this method did not exist in the Japanese versions, which instead used item based promotion (see above). In localized versions, instead of an unpromoted unit ceasing to gain experience once it has reached level 20, it continues to gain experience. At the point it would have leveled up to level 21, it instead initiates Class Change. The unit does not get an additional level up for reaching 21.

This has the advantage of the location-based systems in that promotions are not limited to the number of items available, and avoids the disadvantage that characters need to be in a certain location to promote. However it does have the drawback that the experience gained after level 20 is, in effect, lost (as the unit doesn't get a level up bonus for it, and the unit could have been promoted at level 20 with a Master Seal/Crown, provided the player had one).

This style of class changing has never been used as the predominant method in any of the games.

Event-based class changing usually initiates a class change for specific characters throughout storyline events, with the player having no say in the timing.

A list of all characters which receive event-based class changes:

In general, a Class Change may only be initiated for a character over a certain level. The exceptions are event-based ones.

The level at which a character may first be class changed is usually level 10. Exceptions include Genealogy, where it is 20, Gaiden/Shadows of Valentia, where it varies by class, and Three Houses, where levels are persistent and give access to new tiers of classes. If you wish to have characters reach their maximum potential, you can allow characters to reach the maximum level for their unpromoted class before promoting them, as this allows them more level-ups total. However, in a normal playthrough it is unlikely to get any benefit from promoting at max level since without a lot of grinding most characters usually won't gain enough experience to obtain all possible levels anyway. There are also many advantages to promoting early that are worth considering including gaining significant stat boosts earlier, training weapon ranks earlier, and leveling stats past the unpromoted cap earlier.

In many games, promoted units gain experience points as if they were 20 levels higher (for example, a level 1 promoted unit is treated as a level 21 unit in the experience formula), meaning that promoting a unit below level 20 will reduce experience gained by that unit.

Instead of receiving predetermined stat boosts on class change, characters instead get any low stats raised to the base stat of the class they have become. Any stats higher than the new base stat are left as they are.

In this game, most classes have a third tier, with the exceptions being the magic classes and the Pegasus Knights. For example, whereas most games have Cavaliers promoting to Paladins, in FE2, the Paladins can further promote to Gold Knights.

FE2 also has a class, Villager, which has multiple promotions. When visiting a shrine, a villager will receive the option to promote to a random class out of the available choices. The game offers the option of denying the class change, so one can keep making the villager visit the shrine until the class wanted is offered.

The class Dread Fighter is able to be demoted to Villager through class change, which allows looping.

In Gaiden's remake, Echoes: Shadows of Valentia, Villagers no longer promote randomly, allowing for more consistent looping after Dread Fighters promote back to Villagers. Additionally, there is a fourth tier of classes called Overclasses that are DLC exclusive, allowing all playable classes to promote further once they reach their (if applicable) third tier class and max out at Lv. 20.

Unlike the rest of the Fire Emblem series, a unit's level does not reset upon promotion. This means that there is no drawbacks to promoting as early as possible in FE4, as there is no lost growth.

Lara can change to Dancer through an event, but her normal class strain is that of Thief -> Thief Fighter. The Dancer class is it technically a demotion because Lara loses stats when changing. However, she is able to promote to Thief Fighter after she reaches level 10 as a Dancer.

Almost every class in this game can be promoted to one of two different classes. The player gets the opportunity to choose which one they want after initiating the class change.

Characters in the Tellius games are able to promote without the need of promotional items by reaching level 21; after which, their level will return to 1. In Radiant Dawn, most class sets have three tiers.

As in Sacred Stones every non-specialized class has two promotions. Lords and Tacticians have only one promotion.

In this spin-off, the player's Mirages can change classes through the use of a Master Seal and are given branching promotion options. Each of the playable Mirages has two promotion choices, and can reclass into the second option through the use of another Master Seal. When a Mirage promotes into a new class, they gain access to a new series of Carnages with more powerful skills to learn than those offered by the base class. Class Change is an option that can only be performed by Tiki at the Bloom Palace.

In this spin-off, playable characters are able to promote by reaching level 15 and creating a Surge Crest, which is made by using a Master Seal as crafting material.

It does not matter how early or late a unit is promoted after reaching Lv. 15, as any stat increases they would have gained during level up will carry over to their promotion, allowing players to pick which characters to promote at their leisure. Additionally, as it is a Musou game, levels do not reset.

FE16 breaks many conventions of Class Change. Here, a unit's promotional options is determined by weapon certification requirements (Mercenaries, for example, requiring a Sword level of C or higher) and level requirements (like a unit needing to be at level 5 to access Beginner Classes) in seperate class tiers of Beginner, Intermediate, Advanced, Special, and Master, which require separate Seals of those class tiers as payment for undergoing the Certification Exam. However, the Dark Mage and Dark Bishop classes require a Dark Seal to be used, with Dark Bishop having an additional clause of a character already having Dark Mage unlocked.

Additionally, not only does a unit's level not reset like in FEW and FE4, like in FE2 classes will raise characters to their base stats if they do not have those bases. EXP is also gained at the same rates regardless of class and is only dependent on personal level. Since class swapping is entirely free and the earlier property of raising characters to bases would be in effect, some underleveled prepromotes like Catherine have unusually high bases while still levelling quickly.

A Class Change in Radiant Dawn. 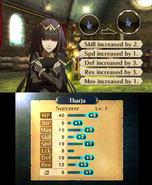 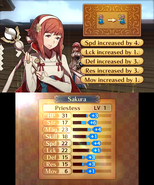