Kingdom of Grannvale
Duchy of Edda

High Priest
[view]
“I'm currently on my way to Bragi Tower. It's on the island just northwest of here. I'm of Bragi descent. If I pray at our holy tower, the truth will be revealed to me. I plan to tell His Majesty all my findings. Sir Sigurd, you've nothing to worry about.”
—Claud

Claud is a playable character from Fire Emblem: Genealogy of the Holy War. He is the duke of Edda Castle and a priest of the Bragi Church.

Being the direct descendant of Crusader Bragi, he is the inheritor of the Valkyrie Staff. He has a deceased younger sister. Because of the blood of Bragi, he is a distant relative to Silvia and her children, assuming he is not made their father, Lene and Coirpre.

Claud is 27 years old, as revealed in the Mitsuki Oosawa manga.

Claud is introduced alongside his admirer Tailtiu when they meet Sigurd while they are traveling to Bragi Tower to discover the truth behind Kurth's death. In his first scene with Sigurd, he informs him that he and Byron have been accused of murdering Kurth and thus have been branded as traitors. Later, Claud arrives at the tower and reclaims the Valkyrie Staff. He also learns that Lombard and Reptor are the people behind Kurth's death. After leaving, he encounters Sigurd on in a battle against the Orgahill Pirates and enlists in his army alongside Tailtiu.

After Sigurd flees to Silesse, Claud returns to Grannvale in an attempt to inform King Azmur of the truth behind Kurth's death, but he is silenced by Reptor and Lombard, whom of whom declare him to be a traitor. Following this, he is forced to flee to Silesse, where he reunites with Sigurd.

Claud is presumed to have perished at the Battle of Belhalla. This is supported by the events of Fire Emblem: Thracia 776, in which Father Sleuf of the Bragi Church claims to have communicated with his spirit in the Bragi Tower.

He says Silvia, who also carries Bragi blood, reminds him of his deceased younger sister.

Claud is a very kindhearted and soft-spoken man who is also rather wise and refined in his manner of speech. He is well-known for advising and comforting those in need, earning him admiration and respect from all who know him. He also appears to be rather innocent, as seen in his first conversation with Silvia, in which he expresses polite offense towards her flashy dancer garb.

Claud arrives late in the first generation, but he comes to you with some strong staves in the Valkyrie Staff and Fortify Staff. The Fortify Staff allows him to heal multiple units in a radius around himself and the Valkyrie Staff (exclusive to Claud in the first generation) allows him to revive dead units. While Claud's potential to heal many units in a single action is powerful, he will generally have trouble getting maximum value from the staff due to his low Movement, barring him from effectively activating the staff among several injured units. If Lachesis has promoted, she will be able to more effectively utilize the Fortify Staff and it may be a good idea to sell it to her.

Claud is not very effective as a fighter as he has no skills and has very low HP and Defense, but he can still deal moderate damage due to his respectable Magic stat. He is somewhat unique in that he has the highest Resistance in the first generation as well as great Resistance growth, making him exceptional at fighting Mage units (as long as they are not bosses wielding Holy Weapons).

Claud is an interesting pick for a father. He has Bragi Holy Blood, giving his children improved growths and +1 to staves. He has the strongest possible Resistance growth, making his children good at standing toe to toe with Mage units. While it can be somewhat interesting to have physical children with strong Resistance growth, the low Strength tradeoff and not inheriting any weapons probably is not worth it. However, Claud's main weaknesses as a father are his growths not complimenting physical children as well as his complete lack of skills.

Claud is best paired with Silvia. Erinys is a solid choice. Edain is a very flawed but alright choice. The rest should generally be avoided due to a lack of Pursuit/skills, undesirable growth rates, or no inheritable items.

In Chapter 3, Claud may speak to Sigurd, but nothing will result of it.

In Chapter 4, Sigurd may speak to Claud, but nothing will result of it.

In Chapter 4, after Thove Castle is captured, Sylvia may speak to Claud, resulting in her gaining 100 love points with him.

In Chapter 5, if Claud and Edain are lovers, he may speak to her, resulting in her gaining the Rescue Staff.

In Chapter 5, after Phinora Castle is captured, if Tailtiu/Sylvia and Claud are lovers, his lover may speak to him, but nothing will result of it.

“Gods... My life is yours. Please watch over theirs in return...”
—Claud's death quote in Genealogy of the Holy War

Claud is illustrated in the trading card game Fire Emblem Cipher with the following cards: 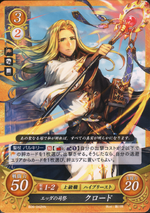 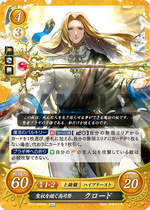 Claud means "limping" or "stuttering" variation of the given name of the Roman emperor Claudius. The name may also be a reference to Claude Frollo, the Archdeacon of Notre Dame who is the antagonist of Victor Hugo's 1831 novel The Hunchback of Notre Dame.