Miracle (FE13-14)
Healtouch (FE13 only)
Rally Luck (FE14 only)
[view]
The Cleric (シスター, Shisutā lit. Sister in the Japanese versions) is a support magical class that recurrently appears across the Fire Emblem Series. A female-exclusive class, the Cleric is unable to engage in combat, instead filling support roles by using Staves to heal their allies. The male variant of this class is the Priest, although females are also referred to as Priests in certain games in the series. While low in Defense and having no means of attack, the Cleric is a critical class to have on the battlefield.

In its original inception in Gaiden, the Sister class is established as a support class that is disparate from the Priest class. Wielding White Magic for healing purposes and Nosferatu for defensive purposes, the Sister class promotes into the Saint class in this title.

The Sister class returns in Mystery of the Emblem, where it serves the same purposes as its predecessor and largely replaces the Priest class from the original. This version of the class promotes into the Bishop class.

In the Genealogy of the Holy War, the Sister class is yet again merged with the Priest class, and it is thus absent from this title and its sequel Thracia 776. There is a class known as "Sister" in Thracia 776, though it is more similar to the Shaman class from the prior game, as they are not just able to heal allies, but also defend themselves with a variety of Anima magic.

In TearRing Saga: Utna Heroes Saga, Sisters are non-promotable and distinguished from the Priest class for being able to transform into Holy Dragons using their personal rings.

The Sister/Cleric class formally returns to the series in The Blazing Blade, where it is firmly established as a female-only class that is separate from the male Priest class. The Cleric again promotes into the Bishop class.

In The Sacred Stones, the Cleric class is further given the option to promote into Valkyrie alongside Bishop, a class that is able to utilise both Light magic and Staves while mounted on a Horse for better movement.

The Cleric ( Kurerikku) class is exclusive to Mist in Path of Radiance and Radiant Dawn, wielding Staves as its equipment of choice. This version of the class promotes into the Valkyrie class. In Radiant Dawn, the Cleric class is given the ability to wield Swords from the beginning.

The class that closely resembles the traditional Cleric class in Radiant Dawn is the Priest class, which has again been made unisex with Laura serving as the only playable member.

In Shadow Dragon and New Mystery of the Emblem, the Cleric class is once again instituted as one that wields Staves as its sole equipment of choice, alongside being clearly distinguished from the male Curate class.

In Fates, the Cleric class is known as the Shrine Maiden (巫女, Miko) and is regarded as a Hoshidan class. Considered the female counterpart of the Monk class, the Shrine Maiden can either promote into the Priestess or the Onmyoji class.

In Fire Emblem Warriors, Cleric and Shrine Maiden both appear and are treated slightly differently. While Cleric wields Axes, Shrine Maiden wields Bows, and acts as a clone of the Archer class. Both retain the ability to use Staffs.

In Vestaria Saga I, there are two variations of the Cleric, the Sestra and the Priestess. Both are identical in terms of stats and functionality. The only difference being that the Priestess can promote into the High Priestess while the Sestra cannot promote at all.

Though entirely unarmed, the Cleric is one of the most essential classes for the battlefield. They can heal immense amounts of HP, allowing the player to avert the permanent deaths of their combat units, alongside helping them to save healing items for emergencies. The Cleric class is, however, much like its male counterpart, defenceless, as their Defense is too low for them to sustain more than a few hostile blows. With no viable means of retaliating during enemy onslaughts, it is thus highly recommended that Clerics are guarded and blocked at all times, so as not to give the enemy any opportunity to strike. While a unit acts as defender, Clerics will be able to support with healing magic from the sidelines. In Radiant Dawn, Mist is granted unique access to Florete, a special blade forged to help her defend herself when engaged in battle.

Clerics do not gain EXP when using a staff in Gaiden, and will only do so when attacking.

Mystery of the Emblem/Shadow Dragon

Note: Lena, Maria and Elice are Priests in the original game.

Concept artwork of the Cleric class from Awakening.

Concept artwork of the Cleric class from Echoes: Shadows of Valentia.

Concept art of the Cleric's staff from Echoes: Shadows of Valentia.

A Level 10 Sister, as she appears in the fifth series of the TCG. 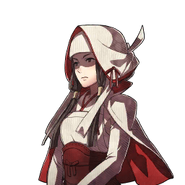 Generic class portrait of a Shrine Maiden from Fates.

Generic class portrait of a Cleric from Echoes: Shadows of Valentia.

Battle model of the Sister class from Gaiden. 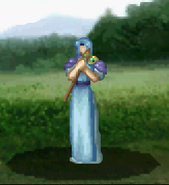 Staff animation of Serra, a Cleric from The Blazing Blade.

Battle model of Mist, a Cleric from Path of Radiance.

Battle model of Mist, a Cleric from Radiant Dawn.

Battle model of the Cleric class from the DS titles.

Battle model of Cherche, a Cleric from Awakening. 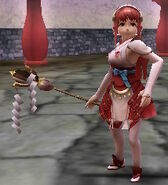 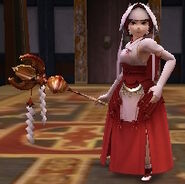 Battle model of the Shrine Maiden class from Fates.

Battle model of Silque, a Cleric from Echoes: Shadows of Valentia.

Map sprite of the Sister class from Gaiden.

Map sprite of the Sister class from Mystery of the Emblem.

Map sprite of the Sister class from TearRing Saga.

Map sprite of Serra as a Cleric from The Blazing Blade.

Map sprite of Natasha as a Cleric from The Sacred Stones.

Map model of Mist as a Cleric from Path of Radiance.

Map model of Mist as a cleric from Radiant Dawn.

Map sprite of the Cleric class from Shadow Dragon.

Map sprite of the Cleric class from Awakening.