The Deliverance
Order of the Zofia

Grant George
[view]
“The right of kings is not decided by blood or station. It lies in what a man believes. What keeps him up at night. It lies in a man’s actions!”
—Clive to Fernand in Shadows of Valentia

Clive is a playable character in Fire Emblem Gaiden and its remake, Fire Emblem Echoes: Shadows of Valentia. He is the original leader of the Deliverance, and the brother of Clair.

Clive, a young man of the upper aristocracy and a social knight, is the first leader of the Zofia libertation army, the Deliverance. He was originally the captain of the Order of the Zofia, but with the coup d’etat of chancellor Desaix, through suggestion of his lover Mathilda, they founded the Deliverance, along with Fernand.

Being harassed by Desaix's forces, Clive and the Deliverance were forced to take refuge in a cursed graveyard, making the haunted grounds a makeshift headquarters. His bride Mathilda and his younger sister Clair were kidnapped during one of the battles, and the failed attempts to rescue Mathilda let him shaken and doubting his own leadership qualities, resulting of the whole army being also down.

When Alm and his group arrive at the Deliverance Hideout, Clive heartily greets them, grateful to them for rescuing his sister. Clive was disappointed that Mycen would not join the rebellion, but decides that, with the increasing number of commoners joining the Deliverance, he should cede the Deliverance's leadership to Alm, the grandson of the legendary knight Mycen, as he believes that Mycen's story of rising above his common birth to become a knight and count of Zofia resonates with the commoners, and Mycen's grandson would be better suited to lead them. Fernand is outraged by this, and abandons the Deliverance on the spot, rather than allow himself to be led by a common villager such as Alm.

When Fernand appears later as part of a Rigelian battalion in northern Zofia, Clive confronts him. Fernand explains that he believes Rigel's morals and standards to be worth fighting for, and that he would rather see Berkut unite Valentia under Rigel's rule, than fight for Zofia alongside a group of commoners. While trading blows, Clive tries to reason with Fernand, only for him to claim that Clive was wrong in making Alm leader of the Deliverance, as his main reasoning, that Alm was Mycen's grandson, was a lie. This, together with a similar claim made by a man at Zofia Castle, plants doubts in Clive's mind.

Following Desaix's defeat, Clive voices his fears that he may have erred in his decision of making Alm the figurehead leader of the Deliverance, and blames Alm of incompetence and accuses him of ruining his life if Mathilda is killed during the rescue. In the outcome in which the party saves Mathilda, Clive's fear of making a mistake was mainly due to Fernand lashing out and abandoning the Deliverance after Clive gave Alm the leadership role, but Alm states that he simply wishes to repay the trust Clive placed in him, and he would not hesitate to welcome Fernand back to the Deliverance if he would choose to return.

After the war, he was given command of the newly formed knighthood of Valentia and married Mathilda. If Mathilda dies during the events of the game, he is killed in battle against pirates instead.

Clive is a very mellow, kind, and calm individual, however, when the situation mandates for him to be serious and imposing, he is gravely so. He sees his fiancée, Mathilda, as his idol and inspiration and does not believe that he is worthy of her. Despite being pushed by Mathilda as the leader of the Deliverance, he is not sure of his own leadership qualities resulting on him doubting and regreting his own decisions, and being unsure of his ability to inspire the rest of the army, especially the common folks.

His humility defined him as a leader, as being able to understand the big picture and recognize his own weaknesses, allowing him to step down as leader of the Deliverance, and appreciate the potential of the common people, like Alm.

While he does not judge his soldiers on their nobility or blood, he stands by Zofia's feudal system and believes that there is a difference between nobles and commoners. This causes some members of the army, most notably Alm and Python, to call him out over it on the course of the story, and even though Clive becomes progressively more open-minded and aware of the mentality of Zofian nobility, he still stand by parts of it, although admitting he really can't relate to the commonfolk and that his views sometimes clash and juxtapose each other.

Rescue Clair at the Southern Fortress, then defeat the undead monsters in the Deliverance Hideout and reach the end of the building. There you will find Clive and Forsyth. Talk to them both and they will join your party.

Clive is a serviceable unit and the first Cavalier recruited in Alm's route. While perfectly capable on his own, he is easily outclassed by other Cavaliers in his route, especially Mathilda and Zeke who have better starting stats and more focused growths. Even Mycen has better performance overall than him. However, Clive's one benefit remains his relatively solid stat growths overall, preventing him from being lopsided, but not truly outstanding like his Cavalier competitors. Overall, Clive serves well as an early Cavalier, but he loses his usefulness with each Cavalier after.

Clive's performance in Echoes remains largely the same as in Gaiden, even with his slightly better growth rates. He tends to be an average Cavalier unit that will be useful in the early game until the player gets Mathilda, who is much better than Clive in stats and growth rates. Besides, Mathilda highly surpass him in Resistance, which his is arguably one of the worst in the game, surpassing only Valbar (who has no doubt the worst Resistance of the game at 0).

If one opts to use the Pitchfork DLC item to change Clive's class, he does pretty well as a Mercenary. The boosted Speed and Skill will help him a lot with hitting enemies and double enemies better than the other classes. The biggest benefit of Clive becoming a Mercenary is when he promotes to a Dread Fighter, not only will his movement will be back to how he was as a Cavalier, but the Resistance+5 and Apotrope skills will greatly help patch up his Resistance, which is his biggest flaw under normal circumstances.

Normally, Clive isn't bad, but he is not the best Cavalier compared to other Cavaliers like Mathilda and Zeke. However, with DLC, Clive can be pretty decent as a Mercenary and its long-term benefits. But if trained properly, Clive might become quite the useful unit even as a Cavalier, with good Strength and pretty much average Speed.

Idealistic Knight
Former leader of the Deliverance and Clair's brother. Idealistic and focused on the good of the kingdom. Appears in Fire Emblem Echoes: Shadows of Valentia.

(If Mathilda is alive)
"He was entrusted with the command of the newly formed knights' order of Valentia."
"Recently, it's been heard that he accepted a beautiful wife."

(If Mathilda is dead)
He was entrusted with the command of the newly formed knights' order of Valentia."
"However, afterwards, he lost his life in a battle against pirates.

(If Mathilda is alive)
Clive was appointed the first captain of the One Kingdom's Brotherhood of Knights. His talent and honesty made him popular with commoners and nobles alike, and under his leadership, the knights flourished. He and his lovely wife were objects of the people's envy.

(If Mathilda is dead)
His heart still heavy from the loss of Mathilda, Clive was appointed captain of the One Kingdom's Brotherhood of Knights. A few short years later, he was killed in a skirmish with pirates. The people grieved deeply over the young loss of so fine a knight.

“To fall before my dreams are fulfilled...”
—Clive's death quote in Gaiden

Clive is illustrated in the trading card game Fire Emblem Cipher with the following cards: 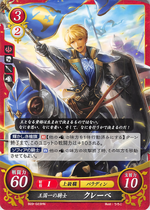 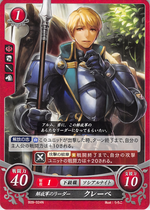 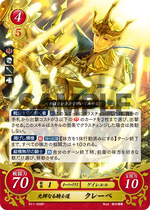 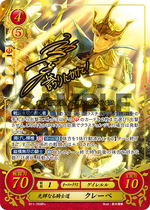