Priest
[view]
“Yeah, I'm just fine. I want to join Sir Seliph's liberation army, father. Thracia is not like it used to be... I want to fight for the people!”
—Coirpre, to Hannibal in Genealogy of the Holy War.

Coirpre is a playable character from Fire Emblem: Genealogy of the Holy War who has minor appearances in Fire Emblem: Thracia 776. He is the son of Sylvia and the younger brother of Lene. His substitute character is Charlot.

After Coirpre was abandoned by his mother at an orphanage in Dahna, he was adopted by Hannibal, who raised him in Thracia. In Chapter 9, he is taken as a hostage by Travant to force Hannibal into battle against Seliph's army. After Disler's defeat and Luthecia is seized, he joins Seliph's army, and can convince Hannibal to do the same. He also meets Lene for the first time, but neither of them ever discover that they are siblings, even after the defeat of the Grannvale Empire.

Coirpre makes a few cameos in Fire Emblem: Thracia 776. In his first one, he can be rescued in by Leif during Chapter 3 after being captured in the child hunts. He later appears at the end of Chapter 7, whereby Leif receives a Warp from him if he was rescued earlier.

As a priest of Bragi, Coirpre is a kind and selfless person, as demonstrated when he casts Ward on Altena despite knowing it takes a toll on the user. He also greatly cares for his adoptive father, Hannibal.

Coirpre, sadly enough, comes extremely under-leveled and rather late in the game. This very fact thus causes many players to bench him. His replacement Charlot comes with the Paragon skill and can obtain the Berserk Staff, making him somewhat easier to use. Coirpre also boasts one of the game's worst classes in Priest, which has very limited Movement and is restricted to staff-use for a full twenty levels. By this point, the player likely has multiple viable staff-users, some of whom boast impressive combat prowess, like Ced, mobility, like Nanna and a promoted Fee, a significant level lead, like Lana, or all of the above, like a Master Knight Leif.

Nevertheless, Coirpre does have some potential. The biggest point in his favor is his ability to wield A-rank staves at base, regardless of his father, which makes him an acceptable utility character with little to no investment. In particular, Fortify, Restore, and Physic are all rather long-range, which may compensate for his bad Movement and stats: the mass-healing of Fortify is something Coirpre can contribute even when rather far from the frontlines. Not only is Coirpre one of the only characters who can use Fortify, but he is a character where using it will generally be the best use of his turn, and to add further appeal, it provides him with a large chunk of XP, alleviating his leveling issues. Unfortunately, Coirpre is mostly a mediocre combat unit on his own terms even when leveled, owing to his poor weapon ranks and lack of offensive skills apart from Adept. If the player plans to use him for reasons aside from his staff utility, he will need a good father, and even then, the investment will take time to pay off, as Coirpre will not be able to attack until he promotes.

The preferred father option is Claud (who passes major Bragi blood, Fortify, and the Valkyrie Staff on to him). Lewyn is also a strong choice, as Coirpre will gain excellent speed, allowing him to dodge attacks easily. He will also be able to use Forseti after promotion, significantly improving his combat abilities, though this comes at the cost of it being unavailable for most of the second generation. Azel is also an acceptable father because Coirpre will gain good Speed and Magic. Lex passes on Paragon, which will make Coirpre easier to level, though this comes at the cost of not being able to inherit staves and having a poor Magic growth.

In Chapter 9, Coirpre can recruit Hannibal by speaking to him.

In Chapter 9, Patty may speak to Coirpre, and he will gain three points of Hp and 100 love points with Patty.

In Chapter 9, after Hannibal is recruited, Lene may speak to Coirpre, and he will gain one point of luck.

In Chapter 10, after Miletos Castle is captured, Coirpre may speak to Altena, and she will gain five points of resistance.

“...Father... Thank you for raising me...”
—Coirpre's death quote in Genealogy of the Holy War

Coirpre is illustrated in the trading card game with the following cards: 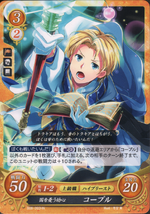 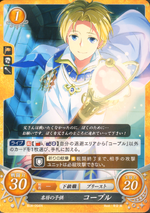