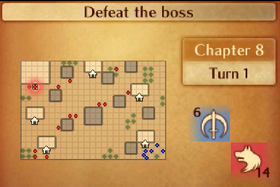 Chapter script
[view]
“Corrin emerges from the Woods of the Forlorn near the Ice Tribe village. However the freezing winds complicate matters.”
—Opening narration

Cold Reception (氷の村の少女 Kōri no mura no shōjo Maiden of the Ice Village in the Japanese version) is Chapter 8 of Fire Emblem Fates in the Conquest Version. This chapter takes place in Ice Tribe Village.

Player will receive 10k gold at the end of the battle if at least 3 villages are visited by players and 5k for at least 2.

There are two lancers by the name of Tribalist who will also seek to enter the villages in order to recruit units for the enemy. Villages visited by either Lancer will be unavailable for the player to visit. Thus a part of the challenge is to visit the remaining villages before the two Lancers make it.

The player, in the bottom-right corner, needs to reach and defeat Kilma in the upper-left corner of the map.

The Lancers are the units that the player should prioritize first, as they will head for the villages and start calling for more reinforcements if they get onto the village tile. Even though they only have a movement of 3 rather then 5, killing them is required to stop them from calling for reinforcements. One Lancer is near the village just north of the south-eastern village, and the other one is next to Kilma.

The Lancer north of the player's position can be troublesome to deal with, as unless the player has Elise or Jakob pair up with Corrin (as a Dread Fighter from path bonuses with boots), he cannot be frozen right from the start. If you do have path bonuses and are playing on Lunatic, it is recommended to reclass Corrin immediately and use up the pair of boots to prevent extra reinforcements from arriving which could potentially allow the Lancers to get to the remaining villages. An alternative to freezing this lancer is to acquire the Rescue from Visit Bonus rewards at 260 points and give it to Jakob/Felicia to teleport Elise closer to be able to freeze.

At the end of turn 1, Niles and Odin will arrive from the south. Niles can easily take out the Dark Mages on the map, as he will usually take little or no damage alone, although Odin can help improve it even more. His high speed can also ensure that he can kill them off in one turn.

The Dragon Vein makes an appearance on this map, just west of the southeastern village. It creates a one-time effect of turning the frozen ice into water for one turn, which can stall enemy units from arriving.

On Normal Mode, Kilma only comes with Heartseeker, a skill which drops the avoid of adjacent enemies by 20. On Hard, he will also get Malefic Aura, which adds 2 extra damage to his attacks. On Lunatic, Vantage is added to his skill roster. He also starts off with a Nosferatu which allows him to recover health, but he only gets 10 extra avoid on him since it cancels out 20 of the avoid from the gate tile. Flora is also on the map and is static like Kilma, although she does have a freeze staff on her on all difficulties.

Although the enemy reinforcements can give extra experience for the player, if you are not planning to use or buy the Ghostly Gold DLC, the 10,000 gold is much more valuable due to the buying power it can give the player for the few upcoming chapters.