Chapter 2: The Protected (recruited in Chapter 3: The Bandits of Borgo)

Henry Mason
[view]
“You need anything stolen, I'm your man. 'Course, my blade's no joke either.”
—Colm at the second attack on Renvall

Colm is a playable character in the game Fire Emblem: The Sacred Stones. He first appears after Chapter 2 and can be recruited in Chapter 3 by having Neimi talk to him inside the bandit's hideout. They can automatically have a support conversation. Before being recruited he will appear as a green unit and will walk around opening doors and treasure chests in the hideout.

A chivalrous thief from Renais and a childhood friend of Neimi, Colm managed to steal Eirika's bracelet while 'walking by'. Colm used his abilities as a thief to keep himself, and later Neimi alive. He would steal items of value from people that seemed wealthy to pay for necessities for himself and Neimi.

During Chapter 3, Colm infiltrated a bandit hideout to find Neimi's lost handmirror, stolen by bandits. Neimi, who was worried for Colm's safety, found Eirika and convinced her group to go with her to the Bandit's Hideout and find Colm.

Colm is rather snide and arrogant, but genuinely cares for Neimi. He is also quite proud of his thieving prowess. It is often hard to tell if Colm is exhibiting his uncaring for others or if he is simply clumsy. In a conversation with Moulder it is revealed he had burned a pack filled with Moulder's belongings twice, Moulder then says he is 'concerned about the condition of Colm's soul.'

Colm has a weakness for Neimi being sad or crying, which she does quite often. He will often try to pretend he doesn't care or pester her about being a "crybaby". If the two obtain an A Support, Colm will be unable to keep up his facade and comfort Neimi.

*12 in the Japanese version

Colm has surprisingly high growths for a thief, but his low bases and swordlock mean that using him in combat tends to be tricky at best. He can take or dodge a few hits, but he needs quite a bit of leveling to become remotely self-sufficient when taking out enemies. Despite Colm's weak combat, he is still useful for a time because of his Thief utility, since he is the first Thief in the game and will probably stay that way for some time. His lack of combat skill doesn't really matter, since he tends to be running around picking locks instead of fighting. However, Colm's usefulness in this regard becomes somewhat obsolete once Chest Keys become available for purchase in the Overworld. Colm is still useful mid-game, helping out in Fog of War battles and in the desert chapter to help search for items in the sand, and while he is inferior as a combat unit compared to others, he is still capable of holding his own with training and investment.

Colm has two promotions, Assassin and Rogue, both of which give him nearly identical stat bonuses. As an Assassin, Colm gains the Silencer skill and a boost to his sword rank, but he also loses his ability to steal items from enemies. While capable of opening doors and chests, he will still require lockpicks to open them. As a Rogue, Colm can pick doors and chests without needing Lockpicks and retains his Steal ability.

Colm is generally better off as an Assassin, as it grants him the Silencer ability to kill off enemy units in a single hit. While some criticals may simply just end up killing the unit, the ability is particularly useful against high Defence targets like Generals and Draco Zombies. Likewise, Rennac will probably have been recruited and already arrives as a Rogue, essentially making Rogue Colm mostly redundant in battle. Likewise, his support with Neimi scales very quickly and provides both of them with additional critical rate when near each other, further increasing the chances of Silencer activating. However, the class has low Strength; if Ross is already a Pirate, it's best to only promote Colm once Ross has been promoted to a Berserker.

Capable Thief
A thief from a village in Renais called Lark. Daring enough to infiltrate the lair of the bandits who burned down his village, and do so alone. Appears in Fire Emblem: The Sacred Stones.

Colm, Good-Natured Thief (気さくな盗賊 Kisakuna tōzoku)
"He politely refused an invitation to become a spy for Renais, returning instead to his hometown. He spent the rest of his days as a chivalrous rogue helping those in need from the shadows."

A Support with Neimi
"The childhood friends became lovers first, then husband and wife. Worried for Neimi's well-being, Colm gave up his adventurer's ways. Neimi passed on her grandfather's skill in archery to her own son and daughter."

Colm is illustrated in the trading card game Fire Emblem Cipher with the following cards: 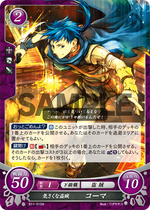 The name 'Colm' is an Irish contraction of 'columba,' the Latin word for 'dove'.