Conclusion of the Crossing Roads 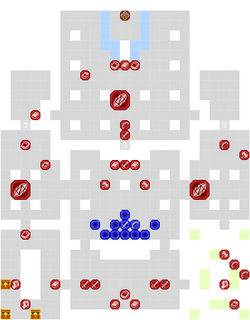 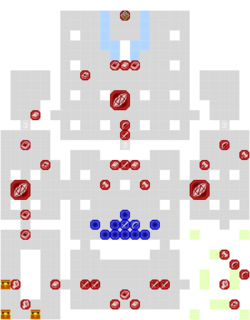 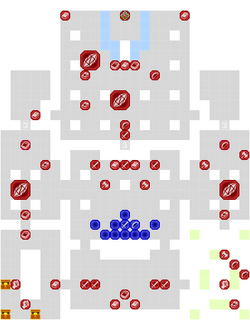 Byleth, Claude and 9 others

Chapter script
[view]
“The objective of this battle is to defeat Edelgard... If showing pity would put my allies in danger, I will not hesitate to kill her.”
—Claude

Having defeated Hubert, Byleth, Claude and the Golden Deer proceed to the Imperial Palace to face Edelgard and to rescue Rhea.

During the battle, Dedue will enter the palace through the north-eastern staircase. He will act as an ally throughout the battle. Although he can be talked to by player units, he cannot be recruited.

You have essentially two choices: charge forward straight toward Edelgard, or take the scenic route and clean out the map for more treasure and experience.  Note that the treasure in the chests isn't particularly good; the Kadmos Shield removes armored weakness - but there aren't any enemies in plot missions left that have weapons that are effective against armor.  (And even if any did, if you are running a Fortress Knight on your team, they probably need a March Ring for extra movement more than the Kadmos Shield anyway, so that they can keep pace with the team.)  So don't feel too bad about skipping it.

If you decide to charge forward, first item of business will be dealing with Petra's (generic Assassin's if she was recruited) screaming 50 Attack Speed and excellent evasion.  Don't let her engage on you during enemy phase: killing her on turn 1 from range is highly recommended, along with the rest of her nearby allies.  Do note that she has Keen Sense for extra avoid for attacks from range 3 or more, so range 2 is recommended.  Ignatz's Watchful Eye passive may come in handy trying to hit her; either use Sniper's Hunter's Volley for a guaranteed 2x shots, or a Bow Knight's Brave Bow.  Other ranged users can roll the dice if she's still alive (Claude, Leonie, Lysithea, etc.).  Conveniently enough, Petra has a Door Key on hand if you didn't have a spare in the convoy anyway to open the door.  There are some long-range ballista users, and entirely avoiding their attacks is not going to happen in the charge-forward strategy: make sure you don't leave users at extremely low health in their range during enemy phase.  After dealing with Petra, the central door guards, and any nearby monster you might have aggro'd (hopefully not both of them!), open the door and send a safe defensive unit forward, preparing to take out the units that advance during enemy phase.  Be warned that some of the enemy units are packing powerful Gambits, so even if you think the math is safe, your unit might get rattled and debuffed by a Gambit if it connects.  By turn 3 or so, the swordmasters at the bottom of the map near Dorothea will eventually start charging at you, but your team should be sufficiently advanced that they'll never catch you.  Dorothea herself doesn't seem to ever attack if you don't actually move into her threat range.  You should be able to engage Edelgard by turn 4 or 5 with this strategy.

If you decide to be a completionist, you can either still try to clean out the central room you start in, or just immediately run toward the bottom of the map toward Dorothea's group.  You have two convenient chokepoints to fight the swordmasters in, at least, for high-defense units or extreme speedsters to hold.  Dorothea & the mages aren't too bad; feathering them with arrows from outside their range should do the trick, with the help of a Dancer if need be.  Once the bottom area is secured, you can take the treasure room at the bottom left.  There's also a third Door Key on the team in the bottom right in addition to the keys on Petra & Dorothea, as well as a Resistance-boosting Talisman on the Gremory.  It is lightly recommend that working through the left side of the map first is better than the right side; the left is where enemy Warlock reinforcements are coming from, while Dedue will hold down the right side just fine forever against the enemy Warrior reinforcements.  If you'd like, you can try to armor break the monsters for ore as well, which is maybe more useful than the actual treasure in the chests.

Against Edelgard, she is sporting the Counterattack skill as usual to prevent free ranged chipping.  You really don't want to eat a Raging Storm, so probably best to kill her in a single turn, or at least not have anyone standing right next to her during Enemy Phase.  Not that it's a big deal with Divine Pulse, but to the extent you're playing "classic" style, do note that Edelgard has both a healthy crit rate and Crest of Flames, so her attacks can inflict a surprise +5 damage compared to what the combat preview calculation claims they're going to be.  There's a bit of dialogue between her and Claude if you lower her to critical HP, if you care.  If you want a very safe way to take her down, War Master Raphael should be able to quad attack with Silver Gauntlets+ very safely against Edelgard, but wouldn't it be more fun to let Claude get the finishing blow?

Claude, Byleth, & Lysithea all have specific dialogue for engaging Edelgard.