Prince of Zofia
Servant of Halcyon

[view]
“I understand why you’d feel that way, but I’ve been in hiding ever since. For me, memories of you from the villa are some of my only happy ones.”
—Conrad to Celica

Conrad, called the Masked Knight before his identity is revealed, is a playable character who appears exclusively in Fire Emblem Echoes: Shadows of Valentia.

Conrad is a Zofian prince whose mother was a Rigelian noble forced to marry Lima IV in order to secure food for her homeland. Because of his Rigelian heritage, he was despised by the Zofian queen and many of his half-siblings. Conrad was very attached to Anthiese and her mother Liprica, his only two family members who treated him with kindness during their time in the royal villa. Tragedy soon struck the Villa when a great fire erupted killing many of the Zofian royal family. Mycen, a great knight, was unable to find Conrad amidst the chaos. Anthiese was presumed to be the sole survivor of the fire.

In reality, Conrad escaped with his mother's handmaiden through an underground passage and was told that Anthiese died. Conrad, stricken with grief, cried uncontrollably. Eventually, they crossed the border and escaped into the Sage's Hamlet where Conrad was taken in by Halcyon, becoming his servant and student in exchange for housing. During his time in the hamlet, he also honed his swordsmanship. Years later, Conrad was informed by Halcyon that Anthiese was very much alive. Under her new name Celica, she was embarking on a journey to Mila's Temple and Halcyon tasked Conrad with protecting her, but was strictly told not to have his face be seen.

Wearing a mask, Conrad first encounters Anthiese when she is suddenly ambushed by a Cantor outside of Zofia Castle. Obeying Halycon's orders, he temporarily joins forces with her and Saber to fend off her would be captors and leaves after they are repelled.

After Celica reunites with Alm and decides to continue onward with her pilgrimage to the east of Zofia, Conrad warns Celica to avoid using a mountain path as the region is plagued with earthquakes. Not heeding his warning since the path would be faster, a sudden quake triggers a landslide, forcing Conrad to step in and rescue her. Conrad warns her to be more careful, but leaves as Halcyon forbade him from joining her forces.

Celica reaches the Temple of Mila, where she is told her mother's royal heirloom is lost. Conrad returns with Liprica's Circlet -- the heirloom in question. He proceeds to formally crown her with it under the condition that she finally reveal her identity as Princess of Zofia.

Later, as Celica and her forces battles Dolth and defeat him, Dolth nearly convinces Celica to sacrifice her soul to Duma to save the Zofian people and to spare Mae. Unable to contain himself any longer upon seeing Celica nearly follow through with the Cantor's lies, Conrad steps in and kills him. Conrad finally removes his mask, revealing to his beloved half-sister that he is very much alive. Celica is overjoyed to have her brother join her forces and Conrad follows Celica for the rest of her journey.

At the end of the war, he retired as a soldier and instead became a civil servant, eventually succeeding Mycen as chancellor, greatly contributing to the prosperity of the kingdom and remaining single for the rest of his days. At some point, no longer needing his mask, he lent it to Zeke.

Conrad is a very sensitive and gentle person, a trait he has had since his childhood due to being despised heavily by most of his family. Anthiese, Liprica, and his mother remain the only family he has ever had that he remembers fondly, thus being the main motivation for him to fight for her cause. Even after 10 years of separation, Conrad dearly loves his sister and her safety remains his top priority before and after joining her army.

Under his Masked Knight persona, he is much more confident and mysterious, maintaining his promise to Halcyon that he would keep his identity hidden while he assists his sister. However, after joining Celica's army, Celica feels that he is cooler and more dashing in his mask persona, causing him to wear it as a means to impress her.

After Dolth has been defeated, Conrad will join automatically after the map ends.

Conrad is a late-joining Paladin with strong base stats, including a large 12 Resistance that not many units compare to at a base. While Conrad's 30% strength growth can be a little problematic at times at getting kills, his good 50% HP and Defense growths can help him survive the plethora of Terrors on Celica's route. Conrad is also the only base Paladin Celica acquires in her journey and can possibly be her only one if Atlas is not promoted into that route. He comes with the Blessed Lance which makes him effective at fighting the many Terrors Celica will be fighting from his join time onward. However, due to the abundance of potential Dread Fighters in Celica's path by the time Conrad is recruited who will handle magic damage better, as well as the three potential Falcon Knights who have built in anti-Terrors effect without needing a specific weapon for such things in addition to flight, Conrad can sometimes struggle to stand out among the crowd. Out of all the re classing mage units, Conrad probably the best option with his good bases, spell list, and growths. Despite that however, Conrad is still a very solid unit who will serve the player well in the final stretch of the game even if his a Paladin or not.

Masked Knight
A mysterious knight who rushes to Celica's aid whenever she is in danger. When he wears his mask, his personality changes entirely. Appears in Fire Emblem Echoes: Shadows of Valentia.

Unmasked Knight
Celica's older brother. Lovingly dotes on his younger sister. Decided to put his mask away for the Day of Devotion festivities. Appears in Fire Emblem Echoes: Shadows of Valentia.

Post-war, Conrad put down his lance and took up a quill, beginning a long career as a civil servant. Following Mycen's retirement, he became chancellor, shepherding Valentia's prosperity for years. Despite an endless chain of suitors, he remained single all his life.

Conrad is illustrated in the trading card game Fire Emblem Cipher with the following cards: 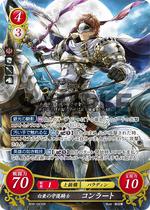 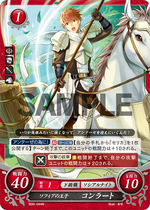 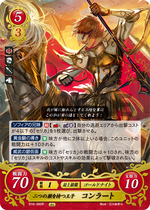 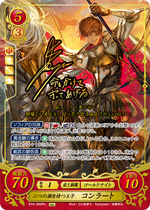 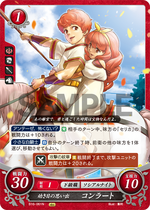 The name Conrad is derived from the Proto-Germanic name Konrad, from conja meaning "bold" and rad "counsel". It was the name of a 10th-century bishop of Constance.