Sarah Emi Bridcutt
[view]
“Alas! For some foul reason, surface dwellers have been after us of late.”

Constance has a polite and refined speech pattern, but she can't hide her domineering nature. 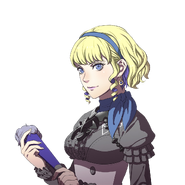