Chapter 2: The Pirates of Galder (Shadow Dragon and the Blade of Light)

Chapter 2: Rebellion at Macedon (New Mystery of the Emblem)

Kozo Mito
[view]
“For Lady Caeda and her man, we'd go through fire and water.”
—Cord to Caeda about himself and Bord.

Cord is a playable character from the Archanea Series of Fire Emblem. Cord is, alongside Barst and Bord, a member of the Talysian mercenary group that is spearheaded by Ogma.

Cord makes his first appearance in Chapter 2 of Shadow Dragon and the Blade of Light, where he, alongside Ogma, Barst and Bord, enlists in Marth's army under the behest of Princess Caeda of Talys. Cord then aids Marth in bringing the War of Shadows to an end, and thereafter reverted to his previous occupation as a woodcutter.

According to his ending, Cord does not appear at all in the original Book 2. Owing to the fact that he returned to his peaceful life in Talys as his previous occupation as a woodcutter, it could be said that he did not wish to take part in the War of Heroes and continued to live in peace, or that he wasn't notified due to Caeda moving to Altea to become Marth's fiancee, and lost connections with her.

Cord returns in Chapter 2 of New Mystery of the Emblem, where he has taken up temporary residence in a Macedonian village. When Marth pays a visit to the village, Cord appears to greet him, promptly enlisting in his army thereafter. Cord will then aid Marth in ending the War of Heroes, before returning to Talys to resume his occupation as a woodcutter.

Bord and Cord appear together in the third and final of Kiria Kurono's side stories. In this game, they exist as Mirage golems that Tharja creates as a means for training Kiria on being cute. However, they malfunction and rage out of control. The battle against the Bord and Cord carries specific conditions; Kiria and Tsubasa are required to be in the active party, and it is the only battle in which both characters have access to the special charm-inflicting skill "Seducing Pose." The attack hits both Bord and Cord, but Bord can only be charmed by Tsubasa, and Cord can only be charmed by Kiria. Bord and Cord are only vulnerable to damage when in the the Charmed state.

Like a majority of the cast in Shadow Dragon and the Blade of Light and Mystery of the Emblem, Cord's personality is not well developed, owing to the minor role that he plays in the games. Nevertheless, it is still possible to deduce certain traits that define his character from the few interactions that he engages in. Of note is the fact that Cord's personality is exactly the same as that of Bord's, one that is proven by their speech mirroring each other both when speaking to Barst in Chapter 5 of New Mystery of the Emblem and in their respective base conversations with Kris.

As a character who is deliberately designed as the counterpart of Bord, it comes as no surprise that a rivalry exists between Cord and Bord, where they constantly attempt to outdo each other in a variety of arenas. This rivalry of theirs is one that has the tendency to become rather heated as the pair lose their cool while in the midst of arguing with each other, a fact that is proven through their base conversations in New Mystery of the Emblem, where they wind up engaging in a violent tree-felling competition. Their rivalry also extends to the looks department, where Cord, through his base conversations with Kris, narcissistically proclaims that he is the more handsome of the two.

In spite of his apparent hatred of Bord, Cord, in actuality, cares for him tremendously; through his base conversations with Kris, he, although initially disgruntled towards Bord for constantly meddling in his affairs, eventually acknowledges that this is merely a means by which his partner expresses concern for him.

The Mirage version of Cord in Tokyo Mirage Sessions ♯FE is shown as attracted to girls who are hot, and coolheaded; with Kiria Kurono for example.

Cord is something of an oddball in Shadow Dragon, as despite being a Fighter, he lacks any kind of base axe rank, or any weapon ranks at all. This will more or less limit him to iron axes for most of the early game if he is used, which can be a significant problem. He will take a very long time to be able to use the Hammer, something Bord can do at base and Barst can do relatively quickly. He does possess some fairly decent growths, barring low Skill, which, when combined with his early joining time, means that a good strategy if Cord is to be used is to try reclassing him. Cord loses very little from reclassing due to his lack of weapon ranks, but this will make him essentially a generic unit minus his growths. Dark Mage is a common choice to try, as Cord strangely possesses a personal Magic growth, and tomes are accurate enough to compensate for his Skill, though this will make Cord extremely frail due to a low personal HP growth. Generally, Cord is an interesting unit to experiment with, but doesn't have much to do in higher difficulties.

Barring a somewhat higher Skill growth and the addition of a Triangle Attack, Cord is largely unchanged from his Shadow Dragon incarnation in terms of usefulness. Once again, he has no weapon rank whatsoever, forcing him to rely solely on his bases and growths, which are mostly average barring an oddly high Magic growth, and encouraging the player to reclass him into something else. He does join fairly early, making him workable enough, but he offers little in terms of advantages and will likely remain mediocre without heavy investment.

"In the Kingdom of Talys, he lived peacefully as a woodcutter."

"Cord returned to his peaceful life as a woodcutter. In time, he became renowned for his speedy work."

"Cord returned to the kingdom of Talys and became a woodcutter. He preferred that life to the grim bloodiness of war."

Cord is illustrated in the trading card game Fire Emblem Cipher with the following cards: 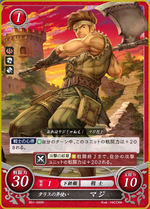 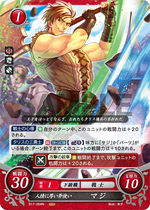