The Avatar (マイユニット, Mai yunitto, My Unit in the Japanese version), default name Corrin (カムイ, Kamui in the Japanese version) is a playable character in Fire Emblem: Fates and the main protagonist of the game. Their name and appearance are customizable by the player. The male Avatar is voiced by Nobunaga Shimazaki while the female Avatar is voiced by Satomi Sato.

The Avatar was born to the Hoshido royal family as the third eldest child of five. They were kidnapped as an infant and raised by the royal family of the neighboring kingdom of Nohr. The Avatar in Fates has the unprecedented ability to transform into a dragon, inheriting particularly strong manakete blood, as not only can they transform, but also have pointed ears, a feature of many manaketes in the series. They only gain the ability to transform after Chapter 5. As a member of royalty, the Avatar wields the power of Dragon's Vein, allowing them to alter the terrain of a map. Later, the legendary blade Yato chooses them as its wielder.

A great war looms over Hoshido and Nohr and soon the two kingdoms meet on the battlefield. The Avatar must choose to side with a kingdom and help with their respective causes or be neutral in an attempt to combat a larger threat by joining the two kingdoms together. The Avatar has the services of Silas, Gunter, and Kaze as well as both Felicia and Jakob, though recruitment order is dependent upon the Avatar's gender. They will follow the Avatar regardless of the route they choose. If the Avatar achieves an S-Support with any character, they will have a child named Kanna, whose gender is the opposite of the Avatar. Male Avatars can also be the father of Shigure, while female Avatars can be the mother of all children aside from Shigure.

It is later revealed that while Mikoto is their mother, Sumeragi is not their father nor is any of the Hoshido siblings are their real siblings but instead their step-siblings. The Avatar will learn this fact in during the story. Alternatively, if they achieve an S-Support with any of the Hoshido siblings they will learn about this from them since Mikoto gave them a letter revealing to them this fact when she had a premonition of the romance between the two.

When the Avatar sides with Hoshido, they will be defending it from the invading Nohr kingdom. If the female Avatar marries Ryoma, she will succeed Mikoto as the new queen of Hoshido and rule alongside Ryoma.

When the Avatar sides with Nohr, they must revolutionize the Nohr kingdom from the inside. If the female Avatar marries Xander, she will rule alongside him as the new queen of Nohr.

When the Avatar sides with neither side, not wishing to hurt those they care about, they will be hunted down by both groups. They know there is a larger threat looming ahead that both sides do not know of, and will attempt to bring both sides together to face this threat. The Avatar leads them to face their father Anankos, a dragon of Touma. Upon defeating Anankos, the Avatar is crowned the new ruler of Touma and brings peace to all three kingdoms.

If the male Avatar achieves an S-rank with Azura by the end she will become the Avatar's queen.

The Avatar learns that Azura is their cousin by blood from a resurrected Mikoto upon her defeat.

The Avatar will never learn that Lilith is their sister due to a vow of secrecy Lilith and Mikoto made with Anankos' heart.

The Avatar is a kind person who cares deeply for the people they love and will come to the aid of anyone who should ask them for it. They are an expert in conversation and negotiation, to the point of convincing enemy troops to join their cause.

The Avatar's secondary class is determined by the player during the creation of the Avatar. They cannot choose Singer, Villager, Fox Spirit, or Garou.

The Avatar can use the Buddy Seal or Marriage Seal to reclass into the base class of any unit that they achieve an A-Support or S-Support respectively, except for Azura, Mozume, Nishiki, Flannel, Kinu, and Velour, in which they adopt their secondary class.

The Avatar, under their default name Corrin (Kamui in the Japanese version), as well as their default Nohr Prince/Princess class appearances in Fates, is a newcomer character in Super Smash Bros. for Nintendo 3DS and Wii U. They are able to morph parts of their body to attack opponents as a reference to the Dragon Fang skill and have the ability to fully transform into their dragon form as well for their down special and their Final Smash. They also wield their signature in game weapon, Yato in its Omega Form. A majority of their special moves are based on the attack animations for the Dragon Fang special attack. They are expected to be released in February 2016.

Super Smash Bros. for 3DS and Wii U

In Hinduism, an Avatar is a terrestrial manifestation of a deity. The term is commonly used to refer to an entity that represents the player in a video game.

Kamui is the word for a divine being in Ainu mythology, although it is almost never written with kanji in modern times. In a more general Japanese context, Kamui refers to the might and majesty of the gods, particularly the Shintō Kami. This is more to tie the Avatar's roots to the Hoshido kingdom which is based on feudal Japan.

Corrin may be a variation of Corin which is the French variant of Quirinus. Quirinus was the Sabine god of war. This could be a reference to the conflict between Hoshido and Nohr in which the Avatar is caught in the middle of. Quirinus is also derived from the Sabine word quirus, which means "spear." Corin is also a male Irish name meaning 'spear bearer', further referencing how the Avatar is forced to take up arms by circumstances.

Quirinus was also an epithet of Janus, the two-faced Roman god of beginnings, transitions, doors and endings. This two-faced nature could represent the Avatar's dual nature as Royalty of both Hoshido and Nohr, and the role of presiding over the beginning and end of conflict, hence war and peace, is a part of FE14's story. It is also notable that "Quirinus" is phonetically similar to the Kirin, which is a variant spelling of "Qilin"; this was a mythical, cloven-hoofed, two-horned beast that was prominent in Eastern Asian culture and which the Avatar's dragon form strongly resembles.

Corrin may also be a variation of Corinne which is, in turn, the English and French variant of Corinna. It derives itself from the Greek word κόρη (kore), meaning "maiden." In Greek mythology, this is the epithet of Persephone, who was kidnapped from her mother, Demeter, by Hades to become his wife. This could be reflecting the Avatar's own kidnapping from their family at the hands of King Garon. Also, after Persephone was kidnapped, Demeter, who was the goddess of the harvest, neglected her duties in her search for her daughter, resulting in poor crop harvests and harsh weather. Interestingly, these are exactly the same conditions that Nohr, the kingdom in which the Avatar is raised in, is subjugated to.

Corinna is also the name of a Greek Lyric Poet from the 5th century BCE. It fell into common usage following the 17th century poem "Corinna's going a-Maying" by Robert Herrick, whilst Corrine did not become popular until Madame de Staël's 19th century novel of the same name. This may be another reference to Nohr as it is based on 5th to 19th century Europe. 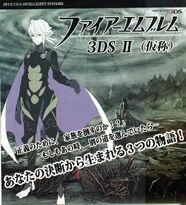 Sketch of both genders of the Avatar by Yusuke Kozaki. 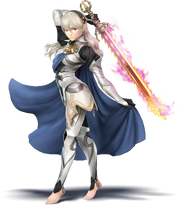 Avatar as a Nohr Prince in the Cipher Trading Card Game.

Male Avatar as a White Blood in the Cipher Trading Card Game.

Female Avatar as a Dark Blood in the Cipher Trading Card Game. 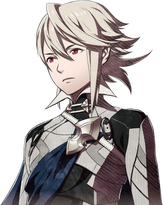 Male Avatar transforming into a dragon whilst paired up with Effie. 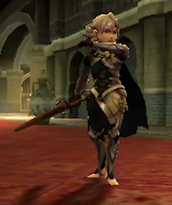 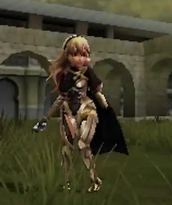 Dragon Corrin as they appear in Super Smash Bros. Wii U