View source
watch 59:43
'Fire Emblem: Path of Radiance' - Chapter 18
Do you like this video?
Play Sound 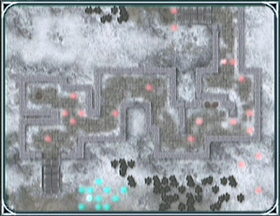 Chapter script
[view]
“You have done excellent work, Ike. Thanks to you, the wound that has scarred Begnion for many long years can finally begin to heal. As promised, Begnion now offers its support to Crimea's restoration. However, Prime Minister Sephiran has yet to return, which limits the reinforcements I can provide. Be that as it may, what troops I can spare await your command. Use them as you see fit.”
—Sanaki

Crimea Marches is Chapter 18 of Fire Emblem: Path of Radiance. It is the first chapter in which the theme Crimea Attacks, also known as Crimean Army Sortie in Super Smash Bros. Brawl, plays. Ike has been promoted to a Lord and he is leading the revived Crimean Army, which still primarily consists of the Greil Mercenaries. You can accept the aid of the Hawk and Heron Laguz before this battle begins, and it is worth your while to do so. Dispatch the enemy forces to achieve victory, including the Kilvas Ravens.

There's a Blizzard that can be stolen from the Sage in the southeast if you have good cavalry units, a thief and Reyson (Preferably in bird form.)

The Sage will switch to wind if a unit stands two spaces in front of him, thus unequipping the Blizzard for you to steal. With a lot of planning, you can both steal the tome without any uses and still recruit Shinon.

Getting to Shinon here will not be easy in contrast to Gatrie. To have Shinon rejoin you for the next chapter, you must first Talk to him with Rolf and then defeat him with Ike. A short conversation will follow and he will be available next chapter. Shinon may or may not be better than Rolf; it all depends on how you trained the two. He wields a Brave Bow, which can be given to Rolf if you do not plan on using Shinon.