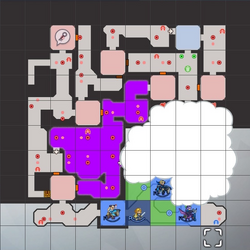 Reach Xander and seize all forts.

With Leo added to their ranks, Lianna's group arrives at a fortress that towers above the fog. It's there they find Xander squaring off against a Hoshidan army.

Activate the Dragon Vein to dispel the fog!

Defeat the Diviner to dispel the Poison Fog!