25th of the Wyvern Moon

Chapter 4: The Goddess's Rite of Rebirth

Chapter 5: Tower of Black Winds (If the Blue Lions or Golden Deer are chosen
Chapter 12: To War (Silver Snow)

Chapter 12: Outset of a Power Struggle

Cyril is a character from Fire Emblem: Three Houses. He is a war orphan taken in by Rhea.

Cyril was born in western Almyra. He lost his parents in one of the constant battles between Almyra and Fódlan, and came to serve in the Almyran army before being captured by soldiers of House Goneril and made a servant of the family. Eventually, he was noticed by Archbishop Rhea, who took him in as a servant at Garreg Mach Monastery.

Cyril is deeply grateful to Rhea for saving him from his life as a war orphan. He takes his duties at the Monastery very seriously. Wanting to be useful to Rhea, he has Shamir teach him the basics of archery.

If Byleth decided to side with Edelgard, Cyril becomes disgusted with their decision and remains with Rhea to defend her from the Empire. If Byleth faces him, he shows anger at them for hurting Rhea and swears to kill them, but Cyril is defeated and is forced to retreat.

Following the Empire's victory at Tailtean Plains, Rhea retreats to the Kingdom capital of Fhirdiad, where Catherine and Cyril are waiting for her. Edelgard orders the Church to surrender and be spared, waiting for their response before attacking. Rhea then orders Catherine and Cyril to torch the city. While Catherine was initially unwilling to torch the city, Cyril doesn't seem to have any reaction to Rhea's decision and agrees to set fire to the city. If Byleth fights Cyril, he declares that since Byleth hurt Rhea, he'll never forgive them. He is killed along with Catherine defending the now Immaculate One.

Cyril is a very hard worker and takes his work seriously to the point that he is prone to seeming cold to others, as he dislikes people offering to do his work for him or help him with it. He wants to be useful to the people he feels gratitude towards, particularly Rhea, as he learned archery under Shamir so he could be more useful to her.

Partly because of his work ethic, Cyril is quite straightforward on his criticism of others and is blunt in pointing out their flaws, easily obliging Manuela's request to him about being honest about the cause of her romantic troubles, and seeing through Hilda's efforts to charm people into doing work for her

While he's Almyran, Cyril has an indifferent to negative opinion of his own people, considering them living a foolish culture. He's particularly critical of how their king does nothing to help orphans, despite their culture creating tons of them. However, because of his origins, Cyril explains in his support with Mercedes that he keeps his distance from people to avoid being treated like an outsider.

Cyril starts off weaker than other characters, but makes up for it with his personal skill, Aptitude, which gives him much higher growth rates. In particular, he will have excellent growths in health, dexterity, speed, and luck, with above-average strength. His magic, defense, resistance and charm growths aren't as impressive, but are still acceptable, though his weaknesses in both Reason and Faith (along with a small spell pool) mean he should generally not be promoted to any magical classes.

Note, however, that if playing as the Black Eagles, Cyril will not be recruitable until Chapter 12, and is completely unavailable if the Crimson Flower route is taken instead of Silver Snow. By the time he is recruitable on Silver Snow, he will have squandered a considerable amount of his leveling potential, which will usually make him less useful. Additionally, if playing on Maddening difficulty, it can be harder to justify training Cyril due to the decreased amount of experience available and limited number of auxiliary battles, but it certainly isn't a bad idea to train him on said difficulty.

Cyril's wide array of skill strengths give him a great set of classes to choose from. Sending him along the path toward Great Knight can be strong due to his strengths in Axes, Lances and Riding, but he'll be left competing with other cavalry-specialized characters such as Ferdinand, Sylvain, and Leonie. The same can be said for making him a Bow Knight; he'll do well at it, but faces competition from other archers. One good way to make use of him is to promote him to Brigand, then Wyvern Rider and then Wyvern Lord, taking advantage of his strengths in Flying, Axe and Lance as well as his stat distribution. Another alternative would be to train him up in Sword and Bow to make him an Assassin, which will boost his Dexterity and Speed growths to extremely high levels (80% each).

Much like other physical characters, various classes can greatly improve Cyril's performance. Mastering Brigand gives him Death Blow for increased damage, Archer can give him Hit +20 to improve his accuracy, Cavalier can give him Desperation to take advantage of his Speed, Paladin can give him Aegis to compensate for his less-impressive defenses, and so forth. Training Cyril up to War Master is less necessary for him since he already has high Speed, making Quick Riposte less useful, though it can still be done if the player desires (and if enough training is done in Brawling).

Overall, Cyril fills in the Est archetype nicely with his weak start and strong growths. If time is dedicated to training him, he can become one of the player's strongest units, along with being very flexible in terms of class choices. He has sheer potential on his side, something that Fire Emblem veterans know not to ignore.

Unable to serve Rhea any longer, Cyril nearly left the church. He was persuaded to stay, however, to assist in rebuilding the monastery he had helped maintain. Thanks to his devoted work ethic, the Officers Academy was able to reopen a few years later. When the new students took the reception hall, Cyril found himself among them.

Byleth declared the founding of the United Kingdom of Fódlan at Garreg Mach and ascended the throne as its first leader. Cyril served as a chamberlain, supervising all general affairs. With the expansion of the kingdom, it was eventually decided that the queen would move to a new royal capital. Cyril wished to accompany her, but was ordered to enroll in the newly reopened Officers Academy. Though reluctant, he complied. A year later, after consistently demonstrating great wisdom and maturity, he won the queen's heart, and they announced their abrupt marriage. The move surprised many, but no one was as shocked as Cyril himself was pleased.

Byleth took on the role of archbishop of the Church of Seiros, and Cyril served her in all things, just as he had served Rhea. As Fódlan stabilized, and the rebuilding effort came to an end, the Officers Academy finally reopened, and the archbishop directed Cyril to enroll there as a student. A year later, after consistently demonstrating great wisdom and maturity, he won the archbishop's heart, and they announced their abrupt marriage. The move surprised many, but no one was as shocked as Cyril himself was pleased.

Petra returned to her homeland of Brigid, and inherited the throne from her grandfather. As ruler, she declared independence from Fódlan and renegotiated Brigid's diplomatic relationships on more equal terms. Some years later, the Church of Seiros expanded its reach to Nuvelle, a town in western Fódlan. The priest sent to this new church, for the purpose of keeping up relations with Brigid, was none other than Cyril. He and Petra met frequently, first for public relations, and then for more private reasons. They fell in love, and were ultimately wed. It is said that their union served as a symbol for the friendly ties between the two countries for the whole of their lives.

After the war, Ashe was formally knighted and appointed the new head of House Gaspard, which had no successors. The young and inexperienced lord faced a great deal of difficulty in governing, until his court was blessed with a new adviser in Cyril. Using skills he learned furing his time as a student at the Officers Academy, Cyril offered Ashe the advice he needed to grow into a worthy lord. Over time, Ashe gained the respect of his people, and Gaspard territory prospered. The pair swore always to be there to help one another, and remained best friends for the whole of their lives.

Lysithea returned home to help her parents restore their family land. Years later, when their work was at an end, she journeyed to Garreg Mach to inform the church of her decision to relinquish House Ordelia's claim to nobility. There she encountered Cyril, who had since graduated from the Officers Academy and joined the Knights of Seiros. During their reunion, Cyril confessed his love to Lysithea and asked her to marry him. She declined, at first, due to her shortened lifespan, but in the face of Cyril's insistence, she chose to spend what days she had remaining together with him. Where they went is unknown, but it is said that, for however long it lasted, they were happy.

Hilda returned to her territory, and founded the first artisan academy in Fódlan. Years later, as the successful headmaster of that school, she journeyed to Garreg Mach to make a donation to the church. There she encountered Cyril, who had graduated from the Officers Academy and joined the Knights of Seiros. When each saw how much the other had grown and matured, a mutual attraction between them blossomed naturally into love. Cyril eventually left the church to become a knight of House Goneril, at the invitation of Hilda's brother, Holst. As Holst's new brother-in-law, Cyril provided essential aid in negotiations with House Goneril's Almyran neighbors.

Shortly after the war, Shamir and Cyril disappeared from the ranks. The Knights of Seiros searched unsuccessfully for them for some time, but finally resigned themselves to the loss. Though the pair was never officially heard from again, rumors swirled persistently for years of two master archers turned thieves. Initially the knights received complaints and investigated, but when it was discovered that the pair only lined their pockets by shaking down those who preyed upon the innocent, they decided it was not an investigation worth pursuing. The thieves' story became a folktale beloved by the people.

Cyril is illustrated in the trading card game Fire Emblem Cipher with the following cards: 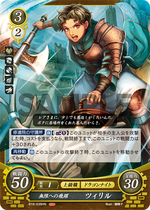 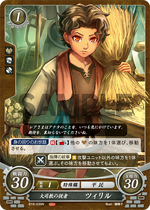 Cyril (also Cyrillus or Cyryl) is a masculine given name. It is derived from the Greek name Κύριλλος (Kýrillos) meaning "Lordly, Masterful", which in turn derives from Greek κυριος (kýrios) "lord".

Cyril as a Wyvern Rider in Fire Emblem 0 (Cipher).

Cyril as a Commoner in Fire Emblem 0 (Cipher). 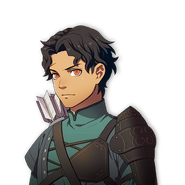 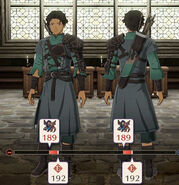 Cyril after the time skip.

Cyril's battle model as a Commoner.

Cyril's battle model as a Myrmidon.

Cyril's battle model as a Soldier.

Cyril's battle model as a Fighter.

Cyril's battle model as a Monk.

Cyril's battle model as a Cavalier.

Cyril's battle model as a Brigand.

Cyril's battle model as an Archer.