Cyrkensia is a bustling port in the Kingdom of Nestra, near the southern border of the Kingdom of Nohr. It is a popular international resort city renowned for its singers and dancers, and is frequently visited by the nobility of both Nohr and Hoshido. A central feature of Cyrkensia is its famed Opera House, where local songstress Layla performs; King Garon in particular is a great admirer of Layla, and travels to Cyrkensia often just to attend one of her shows.

Cyrkensia is first seen in Chapter 12, where Corrin's army finally arrives on Nohrian shores in Cyrkensia, a city in the kingdom of Nestra; Corrin, mistaking this area as being Cheve, deduces that Ryoma probably doesn't need their help if he's in the area, to which Hinoka explains their actual location to Corrin, Nestra being another neutral kingdom much like Izumo, people from both Hoshido and Nohr vacation in Cyrkensia even during times of war, after which Corrin and Azura start to discuss the city's nightlife. After which they meet Layla. Layla's plight involves wanting to return home to visit her mother right away, yet a performance is scheduled for that evening and Garon will be in attendance; Azura offers to perform in Layla's stead as an opportunity to take the Nohrians by surprise, and when Kaden reveals that Azura and Layla look nothing alike, Azura reveals that Zola can rectify that. Azura reveals that, while Garon is distracted by her song, others can approach undetected--and should they manage to capture Garon, Nohr would have no choice but to negotiate for peace. The plan fails when Zola rats them out to Garon and is killed by Garon afterwards, and the Hoshidians are forced to make their escape.

Cyrkensia is visited in Chapter 14, where Corrin leads their army into Cyrkensia, a city in the kingdom of Nestra, Corrin asks Camilla if they should head straight back to Castle Krakenberg; Camilla states that they're in Cyrkensia since Garon wants to meet up with them there, as it's his favorite city in Nestra. Corrin attempts to deduce it's dangerous for Garon to travel to Cyrkensia in such a fashion, to which Camilla states that Nestra is neutral territory and thus nothing eventful should happen unless one attempts to pick a fight; then Corrin reunites with Leo, who prepares to take his place at the theater, but not before explaining to Corrin about Cyrkensia's singers and dancers always putting on a big performance when Garon's in town; as Leo prepares to leave the scene, he suggests that Corrin watch the show and states that warriors need to rest occasionally.

The performance begins. In it, a mysterious singer performs a dance that causes Garon extreme discomfort. Believing it to be a Hoshidan curse, Garon orders them to detain the singer when Kumagera and his troops attack. The singer slips away. After Kumagera's troops are vanquished, they are then ordered to kill all of the singers in Cyrkensia. Although Leo promises to follow the command, he assures Corrin that they will do everything in their power to give the singers time to escape.

In Revelation, Cyrkensia is destroyed due to Valla's invisible forces. The incident causes the Hoshidan and Nohrian forces to fight, each believing the other responsible for the destruction. 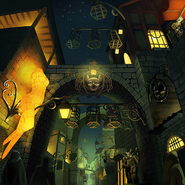