Megan Shipman
[view]
“I, Díthorba, am one of the four Heavenly Knights of Silesse. It's such a shame, but you're going to die!”
—Díthorba's battle quote

Díthorba is an enemy character from Fire Emblem: Genealogy of the Holy War. She is one of the Four Heavenly Knights of Silesse.

Despite being a royal knight of Silesse, Díthorba was one of several knights to betray the queen Lahna. Working under Duke Myos of Tófa, Díthorba took part in the coup against the queen and her returning son, Prince Lewyn.

Díthorba commanded the pegasus troop of Myos during the civil war in Silesse in Chapter 4, leading it into battle against Sigurd's army with support from Cuvuli's Wind Mages. She eventually falls in battle, ultimately failing in her mission.

In Fire Emblem: Thracia 776, Díthorba is stated to be the mother of Misha, a playable character.

Díthorba's dialogue within the game indicates her stake in the rebellion was motivated by power and status as well as fanatic loyalty to Myos. When talking with Myos, Díthorba remarked that Sigurd will fetch a fine bounty from Grannvale. Díthorba viewed Erinys as her inferior, taunting her as weak and said that she would take Erinys' severed head as a trophy.

Despite her treacherous actions, Misha did have some love for Díthorba as a maternal figure, indicating a softer side for family. She was also well thought among Myos troops for her skill, with fellow conspirator, Cuvuli entrusting the rebellion to Díthorba upon his death.

Díthorba's personality is expanded in her appearance and dialogue in Fire Emblem Heroes, whilst still showing her ruthlessness, zealous devotion to Myos and desire for fame, it is also said that she believes Queen Lahna and Prince Lewyn are too weak to lead Silesse, whilst Myos's strong leadership would properly restore Silesse. She cares for her daughter deeply, wanting to secure a good future for her. Díthorba expresses the hopes that Misha will grow up to lead a safer life then her mother did.

In line with Heroes' characterisation of her as a patriot, wearing bracelets that represent her daughter and Silesse, she also seemingly takes great pride in the name of Silesse's Heavenly Knights, remarking that is absurd that somebody of such a low skill level was allowed the title.

Compared to Pamela, Díthorba has less HP and doesn't have the advantages given by the Shield Ring, but can still manage to be fairly troublesome if she manages to attack Sigurd's troops. This is especially so if said army is bogged down in a forest, as Díthorba and her Falcon Knight squadron are all fliers.

Cutting Knight
One of the Four Heavenly Knights of Silesse. Comes to serve Lord Myos, youngest brother of the late king. Appears in Fire Emblem: Genealogy of the Holy War.

Díthorba is illustrated in the trading card game with the following cards: 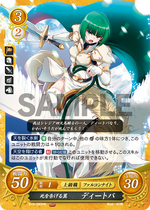 Dithorba was a king from Irish and Celtic mythology. According to medieval Irish legend and historical tradition, Áed Rúad, son of Badarn, Díthorba, son of Deman, and Cimbaeth, son of Fintan, three grandsons of Airgetmar, were High Kings of Ireland who ruled in rotation, seven years at a time. They each ruled for three seven-year stints. Áed died at the end of his third stint, by drowning in a waterfall which was named Eas Ruaid, "the red's waterfall" (Assaroe Falls, Ballyshannon, County Donegal), after him; previously the waterfall had been called Ess Duinn, the "Rapid of Donn", and his death is described as a miracle of sea and mighty wind. Díthorba and Cimbáeth then took their turn, after which Áed's daughter, Macha Mong Ruad, demanded to rule in her father's place. Díthorba and Cimbáeth refused, and battle ensued. Díthorba was killed. Macha forced Díthorba's sons to build her a palace at Emain Macha. She married Cimbáeth and the pair ruled for a further seven years, at the end of which Cimbáeth died of plague, and Macha became the only queen in the List of High Kings of Ireland.