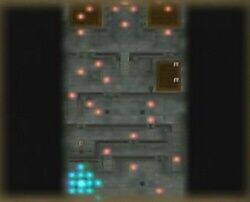 Chapter script
[view]
“A figure from Daein's past appears unexpectedly in the night. A figure thought to have perished in the Mad King's War, the blood-stained right hand of the king himself, the mysterious Black Knight. The Black Knight protects Micaiah against Jarod's cowardly surprise attack. However, Micaiah senses that Jarod has one last move to make. Deprived of his chance to capture Micaiah, Jarod abandons all notions of retreat or negotiation. Instead, he makes plans for revenge. He murders an emissary from his homeland of Begnion and reclaims control of Daein Keep. From within the keep, he launches a savage barrage of catapult fire, all but destroying the castle town. The momentary peace that arrived with the Begnion emissary shatters along with Nevassa's walls, and the people of the city see their kin and their capital crushed under a rain of stone. This treachery proves too much for them, and their grief explodes into rage. Micaiah and company have pitched camp on a nearby hillside. When this merciless attack begins, its brutality leaves them lost for words.”
—Opening Narration

This is the last chance to control the Dawn Brigade, Tormod and his Laguz, Nailah or Rafiel for a while - make sure that you prepare them before starting the chapter. Ilyana will also move to the Greil Mercenaries, allowing the player to transfer items.

To get the items out of the chests, put Pass onto Nailah. It's virtually impossible for her to die, and if you kill the bandits quickly, you will have plenty of time to get Sothe over there after a few turns.

It's possible to use Glare to petrify the Physic priests, allowing weaker units to grind off them for EXP or WEXP, which is one of the ways to overcome Fiona's initial weakness.

It is also possible to easily grind off of Jarod if you are willing to put in the time. Just unequip the Black Knight, put him in Jarods range and let Jarod destroy his Short Spear. Jarod will heal a few HP every turn so you can attack him over and over again and then wait for him to heal up again.

Note that on second playthrough, deploying the Black Knight is one of the requirements to recruit Lehran in the endgame.