The Dagon (ダゴン Dagon) is an enemy-only class that appears in Fire Emblem Echoes: Shadows of Valentia. It is a rare species of dragon that lives in the water, and its meat is supposedly tasty.

Dagons are typically found in dungeons but are usually rare. Their traditional method of attack of using their water breath nullifies Defense and has a range of 2-3. While this means that Dagons cannot use their water breath to attack at point-blank, they are still capable of attacking with their talons to get the job done. They are always capable of counterattacking unless the attacker is a bow-wielder or is using the Mage Ring, as the Dagon automatically switches between its weapons depending on where it is being attacked from.

Dagon was an ancient god of fertility in the Ancient Mesopotamian and Canaanite religions. Dagon was also a Canaanite word that means "fish," which is reflected as its status as a water dragon. 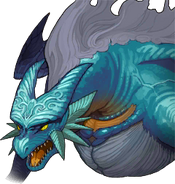 Portrait of a Dagon.

Map sprite of a Dagon

In-game battle model of a Dagon.