Basara
[view]
“Must be my lucky day. I can sell a Kitsune for a fortune.”
—Daichi in Paralogue 10.

Daichi (ダイチ) is a capturable boss character from Fire Emblem Fates on the Birthright and Revelation routes. A scoundrel who poaches Kitsune for their fur, Daichi leads a gang of ruffians to capture Selkie in Paralogue 10.

Daichi appears in Paralogue 10, where he chances upon Selkie when she accidentally stumbles into her father's world after chasing a bird in her Deeprealm. Daichi promptly orders his subordinates to surround and capture her as she, oblivious to the danger that he poses to her, mistakes their actions as an attempt to play with her. Fortunately for Selkie, Corrin's forces are located close by and they, following Kaden's lead, manage to halt Daichi's plans. In the ensuing battle that follows, Daichi is either slain or captured. Daichi also appears as a potential visitor in the DLC chapter Museum Melee.

Daichi will be added into the Unit Logbook as soon as he is persuaded to join the player's army in Birthright/Revelation. In order to use him in Conquest, the only path he's not available in, the said path of Fire Emblem Fates must be purchased through the same cartridge or same saved data on the Nintendo 3DS.

Although not much is known of Daichi's personality due to his minor involvement with the plot, several aspects of his character may still be gleaned. For one, he has been portrayed to be an opportunistic individual, eagerly seizing on any favourable situation that comes his way for personal gain. He is also clearly an individual who prizes monetary wealth, a fact that is revealed through his intent to sell Selkie's fur, one that sees him lamenting over his inability to do so in his defeat.

Daichi's starting stats are rather abysmal, especially his luck, as generic Basaras have better Luck than him. However, Daichi can still prove useful, as his primary advantage over them is the fact that he has a positive modifier in his offensive stats, although he does take a slight blow in his defense. Despite his poor starting stats, he can recover rather quickly while in the Basara class due to his well-rounded stat growths. This also makes him a good user for the Grandmaster class as his well-balanced Strength and Magic will ensure that he will benefit from Ignis greatly.

“We're here to poach fair and square! You won't stop us!”
—Daichi's pre-battle quote.
“That fur... That lovely, lovely fur... Would have made a fortune off it...”
—Daichi's death quote.

Daichi is a traditionally masculine name of Japanese origin. Dai means big or great, and chi can be translated as either earth/land or wisdom/intellect. 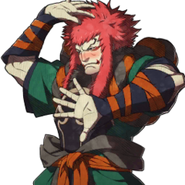 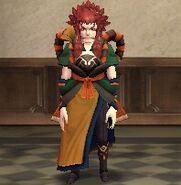