Thief
[view]
“You think I like doin’ this!? Do you have any idea just how low our army’s food supply is? That takes money!”
—Daisy

Daisy is a character from Fire Emblem: Genealogy of the Holy War. She is the substitute character of Patty if Brigid is not paired up. She is the sister of Asaello, and fulfills the story role that Patty would have otherwise played.

Daisy is a commoner that grew up in an orphanage in Conote, with her brother Asaello and other children, and resorted to thievery to support the orphans whom she had taken under her wing. She comes from a family of poor hunters from the area, but lost her parents during the Munster and Thracia conflict.

She discovers Aed Shrine, a location that is rumoured to be filled with treasures, and there she is caught by Shannan when she attempted to steal the holy sword Balmung. She refuses to give the sword back to him and runs mischievously. Though, she eventually returns his weapon when they need to fight back other looters, and she confirms that he is the true Shannan.

When she meets Seliph for the first time, she is excited to see him, and asks to join his party, in exchange of her skills of stealing money for his troops. He is hesitant to accept a thief in the army, but Daisy explains that most of the time, she strategically gets money from Imperial soldiers that stole from villagers, and that she needed to do that her whole life, to survive. Seliph then apologizes for judging Daisy, and accepts her in the party. She gives the brave sword to Seliph as thanks, which he finds adorable.

She meets her brother Asaello in the battlefield, and is disappointed to see that he was hired by the enemy army. Though, she convinces him to switch sides and recruit him for the Liberation army.

She shares her own personal conversation with Shannan after Bloom is defeated in Chapter 7, in which he turns Daisy's professor, giving private lessons in swords arts to help her to be stronger. She also gets a special convo with Deimne, in which he expresses his feelings of hopelessness duo to their commoner background and lack of holy blood, feeling that their contribution to the war is insignficant. Daisy agrees that the nobles don't need them but is glad with the prospect of returning to a simple life.

If she romances Ares, she will be the queen consort of Agustria instead. If she marries Ced, she can become queen of Silesse. In another scenario, if she marries Leif, she will turn Queen of Thracia. She will move to Yngvi and became it's next duchess if she is paired with Febail. And finally, should she marry Oifey, she will became the next high duchess of Chalphy.

Daisy is carefree, optimistic and bubbly. Overall, she shares similar personality traits with Patty: Cheerful, headstrong, slightly sassy and kind. However, Daisy appears to be a little more immature than her substitute, enjoying pranks and throwing childish taunts at Shannan, getting a silly enjoyment out of scaring him when she's bored, and enjoying teasing her brother Asaello. She is also somewhat of a fan girl, getting incredibly excited when meeting Seliph and after learning Shannan's true identity.

Like most thieves, Daisy has a fondness for stealing things, being excited over the haul she manages to acquire at the Aed Shrine.

Daisy is among the weakest units in Genealogy of the Holy War, arguably the weakest character of the entire roster. While the character she substitutes for, Patty, is also a weaker second generation unit, Daisy is even worse by a fair margin. Although Patty's mother, Brigid, passes her no skills, she has a lot of potential fathers that will give her better skills and growths than Daisy, where Daisy only comes with the Prayer skill which can be difficult to effectively utilize, particularly on such a fragile character.

Compared to other substitute units, Daisy is still very poor and likely the worst overall substitute. Not only are her base stats terrible other than her Speed, but her growths are the second worst of substitute characters and some of the lowest in the game. Even more unfortunate is that her lopsided Speed growth is likely to be completely wasted, as between her Speed base, conversation with Shannan, and Speed growth, she will lose 9-10 Speed to her class caps. This actually makes her growths the worst in the game since 30% of her Speed growth is superfluous. One of the most serious problems for Daisy is that even at maximum level, she is unlikely to have double digit Strength due to her terrible base Strength and 10% growth. Combined with C-rank Swords until Promotion, she will have a lot of trouble even damaging enemies, let alone killing them. Compounding that issue is a lack of Pursuit before Promotion. Yet more problems arise in her abysmal durability with some of the lowest HP in the game and defensive stats that will barely break double digits. All of this combined makes Daisy an incompetent combat unit, one that will be very difficult to level outside of methods like Boss Abuse or Gold trading, and one that probably is not worth leveling at all unless you want to make recruiting Asaello easier.

While she will get a boost after promoting since she will gain Pursuit, some Strength, have very high Evasion, and access to A-rank Swords, the only thing she will truly wind up good at is evading enemy attacks between Prayer and her capped Speed. Daisy is simply too feeble and will require an extraordinary amount of help from rings and high level weaponry just to make her usable, and it is generally not worth doing so when other characters can make much better use of those items.

In Chapter 7, if Shannan talks to Daisy, Daisy will give Shannan the Balmung, and she will gain 100 love points with him.

In Chapter 7, if Daisy talks to Seliph, he will receive a Brave Sword, and she will gain 100 love points with him.

In Chapter 8, Daisy can recruit her brother Asaello if she speaks to him.

In Chapter 9, if Asaello talks to Daisy, Daisy will gain one point of luck.

In Chapter 9, after Coirpre or Charlot is promoted, have Daisy initiate a conversation with either one to boost his HP by 3 points. She will also gain 100 love points with the character in question. Do note that this conversation will not occur if either character already has a lover.

In Chapter 10, if either Lester or Deimne speaks to Daisy, she will gain three points of HP and 100 love points with whomever spoke to her. Do note that this conversation will not occur if either character already has a lover.

In the Final Chapter, Daisy can speak to her lover, provided he is either Seliph, Shannan, Lester, or Deimne. This will result in the lover in question gaining three points of HP and three points of speed, with Deimne gaining an extra two points of HP, as compared to the others.

Daisy is illustrated in the trading card game Fire Emblem Cipher with the following cards: 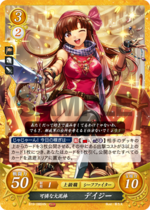 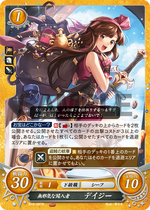 Daisy is the name of a flower, originated from the words of Old English "daeges ege" which is so called because it opens in the morning.