Leader of the riders of dawn

Paladin
[view]
“Ya-har! There's a sensible lad. Come fight with us instead! I'll pay you twice what that fool would!”
—Dalen trying to incite the player to side with the Riders of Dawn

Dalen (ディン, Din in the Japanese version) is an enemy boss character from Fire Emblem Awakening. He is the leader of the mercenary group called the Riders of Dawn and his rival is Gyral, who also leads the Stonewall Knights.

He shares his portrait with Dalton. 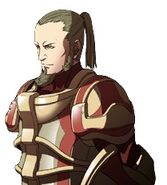 Dalen trying to convince the shepherd to join his side