This page is about the Hasha no Tsurugi manga character, for the Genealogy of the Holy War boss, see Danann. 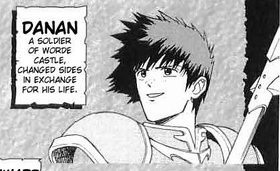 Danan is a manga character in Fire Emblem: Hasha no Tsurugi. He is a soldier of Worde Castle, but he later betrayed his lord, Ranward, in favor of Youzen in exchange for his life. Al's party meets him in a destroyed Worde Castle posing as one of the survivors and offers to help the group find Lord Ranward. However, it was a trap set by Youzen in order for him to obtain more prisoners of war for Bern, and Al, Tiena, and Gant are captured. He eventually sees the error of his ways and attempts to help them all escape, Ranward included, from Youzen's forces. After the death of Ranward, he is given a spear by Gant and swears to Tiena that he will restore Worde Castle to its former glory.

Retrieved from "https://fireemblem.fandom.com/wiki/Danan_(Hasha_no_Tsurugi)?oldid=472488"
Community content is available under CC-BY-SA unless otherwise noted.