View source
watch 00:56
What are Dancers?
Do you like this video?
Play Sound

[view]
“You won't meet a finer dancer in all the realms! Her moves inspire soldiers to work twice as hard!”
—Basilio explaining a Dancer's role to Chrom.

The Dancer is a support class that debuted in Fire Emblem: Mystery of the Emblem.

Traditionally a female-exclusive class, the Dancer possesses the unique ability to utilize the Dance command on an allied unit who has taken an action that turn. Their Dance revitalizes the unit, allowing them another full turn of movement and action. However, dancers cannot reinvigorate other dancers. The given explanation, according to Heroes, is that this was attempted by a pair of goddesses who continued the cycle of rejuvenation for a hundred years and both expired at the same time in the morning of the 101st.

Dancers are not typically known for their combat ability, with some unable to attack under any circumstance such as Larum or Tethys. If they do have combat abilities, they tend to gravitate towards Swords. Their overall offensive prowess is often low, relying on Speed and Skill to perform double attacks and perform critical hits, but often offset by low Strength and general frailty in the defensive categories. Dancers are generally player-exclusive, only being encountered as enemy units in various chapters of Thracia 776 or when fighting another player's team in Awakening. Male equivalents are normally other classes, such as the Bard class. Fire Emblem: Three Houses introduced the option to have male dancers for the first time in the franchise's history.

While other unit classes have the same ability to refresh units through similar, yet differently named commands, "Dancer" is often utilized as an umbrella term for all units with this ability by fans of the franchise. Examples of other Dancer-like classes include the Heron Laguz of the Tellius, the Bard class used by certain male units, and Azura's Songstress class from Fire Emblem Fates.

Anew serves a similar purpose to Dance, though it has limited uses and can be used by a Staff wielding class by a unit with a high enough Weapon Level.

In its original inception in Mystery of the Emblem, the Dancer class is granted the ability to engage in combat with Swords alongside supporting their allies through invigorating dances. Unable to promote, Dancers are simply permitted to gain a maximum level of 30.

The Dancer class appears in Genealogy of the Holy War as classes of only Sylvia, her daughter Lene, and her substitute Laylea.

In Thracia 776, the Dancer class can only be accessed by the player by having Lara, a female character who starts as a Thief, trigger an event in Chapter 12x. Able to trigger the event even as a Thief Fighter, Lara is also, oddly enough, able to promote into the aforementioned class as a Dancer. This title functions as the only one in the series within which Dancers emerge as enemy units.

In The Blazing Blade, the Dancer class, alongside its male counterpart, can perform special dances with the aid of rings to bless their allies with additional bonuses that improve their combat prowess for the duration of one turn. Four of such rings exist in the game; Ninis' Grace increases Defense and Resistance, Filla's Might increases Attack by 10, Thor's Ire increases Critical hit chance by 10% and Set's Litany increases Avoid by 10.

In Path of Radiance and Radiant Dawn, the Dancer class is replaced by the Heron Laguz, who refresh their allies' expended turns through the power of Galdrar. In Radiant Dawn, Galdrar, much like the special rings in The Blazing Blade, possesses different variations that improve allies' combat prowess.

In Awakening, the Special Dance skill that Dancers learn imbues their dances with the ability to simultaneously refresh a selected ally unit and boost their combat prowess for one turn.

In Three Houses, the Dancer class is not unique to any specific character, but only one character can have access to the Dancer class during a given playthrough. The class has proficiency in Swords and Authority, and can also use Reason and Faith magic. This is also the first game in which males can be Dancers. The class is unlocked after a student chosen by the player wins the White Heron Cup over contestants from the other houses. To win the contest, the selected student must have at least 13 Charm before the third week of the Ethereal Moon. Before then, the chosen student can also practice their dancing, permanently raising their Charm by 5. If the player's representative in the contest loses, access to the class is permanently lost. Even if the player recruits the student that did win the contest to their own class, they will not be able to reclass the recruited student into a Dancer.

In Fire Emblem Warriors, the Dancer class appears as the base class for Olivia. The class retains the ability to use swords and can dance (which restores her allies Warrior Gauges) with her Strong I attack, which scales on how full her gauge is. Unlike her Awakening version (and something no Dancer has done so far), Olivia's Dancer class can promote into the Prima class.

Overall, Dancers tend to lack any sort of offensive presence in battle with generally low base stats across the board, alongside subpar offensive and defensive stat growths. Some dancers, such as Ninian from The Blazing Blade, are unable to equip any weapon for self-defense. To compensate for this, Dancers are blessed with high Speed and Luck growths, both of which contribute immensely to their superb evasion. Their decent HP growth also helps ensure their survivability on the battlefield, allowing them to sustain a sizeable amount of damage before running the risk of being felled.

Due to their high Speed, armed Dancers can thus perform double and critical attacks quite frequently if used offensively, although they will need Energy Drops and other strength-boosting items to be optimal for combat purposes.

To make up for their general offensive shortcomings, the Dancer's unique Dance ability allows them to reinvigorate allied units who have expended their turn to perform a second turn of action in the same Player Phase. This allows them to give the more offensively capable units a chance to launch more attacks and further weaken the strength of enemy forces. In some titles, Dancer units are further able to bestow bonuses to the units whom they perform dances for, such as Ninian, who can utilize specially-crafted rings like Thor's Ire to boost her allies' combat effectiveness.

Concept artwork of the Dancer class from Genealogy of the Holy War.

Concept artwork of the Dancer class from Awakening.

Official artwork of the Dancer class from the TCG.

A Level 1 generic Dancer, as she appears in the first series of the TCG.

A Level 10 generic Dancer, as she appears in the fifth series of the TCG. 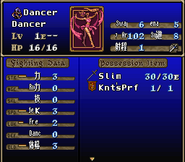 A generic dancer in Thracia 776. 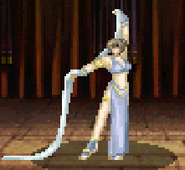 Animation of Ninian performing a Dance from The Blazing Blade.

Phina's dancer sprite from New Mystery of the Emblem. 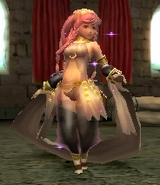 Olivia's battle model as a Dancer from Awakening. 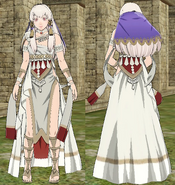 Map sprite of the Dancer class from Mystery of the Emblem.

Map sprite of the Dancer class from Genealogy of the Holy War.

Unused map sprite of the Dancer class from TearRing Saga.

Map sprite of the Dancer class from The Blazing Blade.

Map sprite of the Dancer class from The Sacred Stones.

Map sprite of the Dancer class from New Mystery of the Emblem.