Danger in the Dark

Danger in the Dark 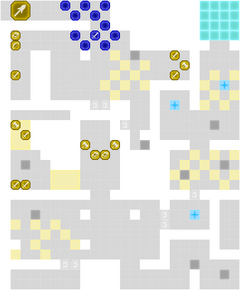 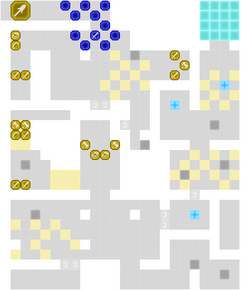 Get all units to the target destination

Danger in the Dark/Script
[view]
“For crying out loud... Those creepy doll things must love a good chase. They won't let up!”
—Balthus

Danger in the Dark is the fourth chapter of the Cindered Shadows side story for Fire Emblem: Three Houses.

Having successfully retrieved the Chalice of Beginnings, the Ashen Wolves and the Officers Academy students regroup back in the tunnels under Garreg Mach, but they are pursued by another golem. Hapi thinks they should just throw the chalice back to it and be done with it, but the others don't want to back out after getting so far. Yuri has a plan to use the heavy gates in Abyss to stop their pursuers. While running through the underground, opening and closing the gates behind them, bandits appear in front of their path and demand them to hand over the treasure. Constance wonders just how much information these bandits have.

Back to safety in Abyss, two residents ask the Ashen Wolves where they've been at a time like this, and tell them that Aelfric has been abducted. Yuri orders the residents to alert the church and the Knights of Seiros to the matter, as things have gotten too out of hand for them to try to cover up. Hapi and Linhardt find a ransom note in the Ashen Wolves classroom, telling the team to meet at the ruins of the old chapel with the chalice, or Cardinal Aelfric's life will be forfeit. Aelfric being a Cardinal of the Church of Seiros comes as a surprise, as the identities of the cardinals is kept top secret. Constance wonders how the enemy could know they were after the chalice, and they all come to the conclusion that there is a traitor in Abyss.

While discussing their next plan of action, Alois arrives with a few of the Knights of Seiros to lend their aid. He laments that he cannot do much more, as most of the knights are out dealing with the Western Church, but that he will do whatever he can to help. They fill Alois in on the details that they have about the chalice and the enemy's aim, and he tells them he must report this to Lady Rhea at once.

This chapter has an defeat condition where any unit defeated will lead to failing the mission. This applies to Casual Mode as well. You have ten turns to get all units through the first gate. This is followed by a further ten to reach the target destination.

It is best not to dawdle on this chapter and have all units with short movement ranges at the front at all times. Mounted units like Constance, Hapi, Claude and Dimitri should be used to open the gates and enemies should only be confronted if they are in the way.

The chapter begins with a Golem behind the party and some enemies either side. The Golem is too powerful to be defeated, but it is slow so all units should be able to outrun it. Have a flying unit open the first gate and ignore the enemies to the west. Only the ones to the east and the south should be engaged. Once everyone has gotten past the first gate, it will close, leaving the enemies stranded. A new Golem will appear, and this one is also too powerful to defeat. However, it will only start moving when everyone has crossed the first boundary; this should give enough time for a mounted unit to get over to the switch that opens the way forward.

This section will also feature reinforcements from bandits. These are weak and count as a separate enemy faction from the phantom soldiers and will often engage the phantoms. However, they are also positioned in the way of the target destination meaning they will need to be engaged.

On the way to the second gate is a locked door that needs Yuri, Ashe or a door key to unlock. There are enemies on the other side though. After the second gate is cleared it is almost a straight shot to the goal. However, the turn limit is not extended after crossing this gate, unlike with the first one. Additionally there are enemies in the final room. These receive reinforcements every time someone crosses the second gate making it easy to get overwhelmed. Also note that this is not an escape map; everyone must be standing on one of the blue squares at the end of the map for it to count as mission clear.

Rushing forward will not work as well here. Some notes to consider (before the first gate)

From here, you should have the majority of your units in the room behind the gate, all while the next room's Bandits haven't even appeared yet. On the way to the next gate:

From here, you can finish off the rest of the Bandits and get your remaining units to the escape room.