Daniel is an NPC character appearing in Fire Emblem: Path of Radiance and Fire Emblem: Radiant Dawn. He is Jorge's older twin brother, and part of the Merchant Convoy. In both games, he is in charge of forging Weapons for the player's army.

He likes to play war games with his brother, and one Base Conversation in Path of Radiance has him ask Ike for advice on how to manage combat between boats. The only visible difference between him and Jorge is that Daniel has brown hair, while Jorge has blonde. Daniel also seems to be the kinder and more patient one of the twins.

In the sequel, Radiant Dawn, Daniel and the rest of the Merchant Convoy appear to aid Micaiah in her struggle to liberate Daein from the occupation. Later on, the Merchant Convoy joins back with Ike and his team, and eventually runs the Vendor and forging for the Hawk Army. Once again, Daniel is in charge of forging weapons, but now multiple weapons can be forged per chapter instead of only one. Additionally, a Coin can be used to potentially improve the stats of the forged weapon depending on the coin used.

Daniel's portrait in Path of Radiance. 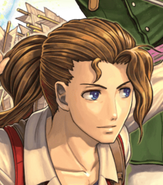