Strategist
[view]
“How sad for you to make it all the way here only to be butchered by me!”
—Daniela, Birthright Chapter 14: Light Scatters

Daniela is a capturable boss character who appears in Fire Emblem Fates on the Birthright route. A general of Nohr, Daniela leads a large army to protect her country's borders from the advance of the Hoshidans.

Commanding one of Nohr's border guard groups in Chapter 14, Daniela is stationed right in front of a gate leading into the country. She plays a minor role in the plot, only speaking when she is engaged in battle, during which she displays an arrogant confidence in her combat capabilities.

Daniela will be added into the Unit Logbook as soon as she is persuaded to join the player's army in Birthright. In order to use her in either Conquest or Revelation, both of the said paths of Fire Emblem Fates must be purchased through the same cartridge or same saved data on the Nintendo 3DS.

*8 as a playable unit

On Normal mode, Daniela does not pose much of a threat and can thus be taken down easily. Regardless of the mode being played, Daniela can be easily disposed of utilizing the three Dragon Veins inside the fort, which will leave her with 3 hitpoints when they are all used. This allows for setting up a kill for a weaker unit, or capturing her with ease.

As a capturable unit, Daniela does not make for a particularly useful ally. While she possesses the highest base Luck as compared to all other capturable boss characters, she is severely lacking in Magic, and will need multiple Spirit Dusts to fix this flaw. Despite this deficiency, Daniela does start with the Savage Blow skill on all difficulties, a redeeming factor that makes her useful for weakening enemy units sufficiently for lower-levelled ally units to defeat.

The Troubadour is Daniela's base class set, and she will thus be able to learn both the Resistance +2 and Demoiselle skills. Both do not provide much help to her, as Demoiselle is superseded by the more potent Inspiration, alongside the fact that the effectiveness of Resistance +2 wears off as she levels up. Daniela is further able to be class changed into the Maid class.

As a Maid, Daniela can learn the Live to Serve and Tomebreaker skills. Since Daniela starts off with a B rank in Staff proficiency, she can thus employ most Staves available in the game. This, combined with her decent Magic, allows her to play a healing role very effectively. With the Live to Serve skill, Daniela's role as a healer is further amplified, as she is, for the most part, able to replenish her HP on her own without the aid of other healing units. Upon learning the Tomebreaker skill, Daniela's combat capabilities against Tome-wielding units will be honed, allowing her to double as both a combat and support unit.

“How sad for you to make it all the way here only to be butchered by me!”
—Daniela's pre-battle quote.
“Impossible!”
—Daniela's defeat quote 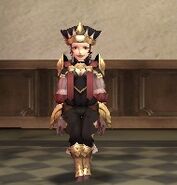 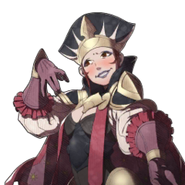