With his high HP, strength, and defense and below-average speed, Daoud functions very much like a traditional tank, able to take a massive amount of punishment while inflicting damaging blows in return. His excellent defensive capabilities are greatly enhanced with Axe Defense and Robust, providing an even greater defensive boost and immunity to cripples respectively. Pulverize is a potent offensive tool, whose effectiveness is boosted with his ability to use shields, and Yell can substantially boost combat prowess when stacked. Combined, both of them can let him easily take down certain tough targets. He is particularly useful in Chapter 5 as he can boost himself to maximum strength and visit the house to teleport him to Lyrac two turns later, whose HP he can reduce to 1 with Pulverize (assuming the boss activates his shield), granting a very high chance of crippling him.

One interesting aspect about Daoud is that he is one of the only two characters whose stats are unbracketed, and the only such character who joins before the final chapter. This means that with a great deal of luck or save manipulation, Daoud can end up with extremely high stats across the board and higher stats than everyone else on the team. The amount of time needed for this to occur is rather questionable though, especially since Berwick Saga's design makes possessing extremely high stats less important than in other Fire Emblem games.

Daoud has a fair number of flaws though. He lacks a mount, but unlike other infantry units, he has the Knight movement type - the same one possessed by most horse and wyvern riding units when dismounted - meaning he is very likely to have movement problems. This is compounded by his skillset, as with the exception of Robust, all of them require him to stand still to activate; Yell in particular requires him standing still for several turns in order to get the full benefits of the skill. He also can have accuracy problems, further hampering his combat when he does make it to the front lines. This makes Daoud useless for tasks that are time-sensitive or demand high mobility, which are common throughout the game.

Daoud can also be difficult to promote due to the high axe skill requirement to promote and his subpar starting axe skill. Although his growth in axe skill is good, it is somewhat dampened by his accuracy and mobility problems, which indirectly depresses the amount of weapon experience he can gain on a map. This is mainly a flaw for ranked runs, as he needs to be promoted to contribute his point to the Happiness rank.

In short, Daoud is a mediocre unit. Though not lacking in positive qualities, his strengths are somewhat dulled by his numerous flaws, and it can often be difficult to justify granting him a deployment slot. He has a few moments of glory should one choose to put the time in him, but can safely be benched without missing much.

Daoud's portrait as a Great Knight. 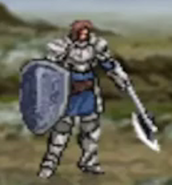