Darios is a character in Fire Emblem Warriors. He is the son of King Oskar, making him the prince of the Gristonne Kingdom and the wielder of the legendary sword Risyl.

Darios has issues connecting with both his father and his countrymen, instead preferring to spend his time in Aytolis. He is the one who taught Rowan swordplay and taught Lianna the academic arts. The twins treat him like an older brother.

Darios arrives in Aytolis at the beginning of the game, and spars Rowan while Lianna watches. After defeating Rowan, Lianna is about to spar with Darios herself when the Gates of the Other World suddenly open, causing monsters to flood the palace. The three work together to fight off the monsters, and meet up with Queen Yelena to make their escape. However, while running through a cave, Yelena is separated from the rest by large boulders, and gives the Shield of Flames to Rowan and Lianna before urging them to go on without her.

After that, Darios continues serving as a mentor and ally for the twins as they find heroes of other worlds to power up the Shield of Flames with the heroic orb essences from the chosen heroes called Gleamstones.

When the Gristonne army, led by Validar, attacks the Ylisse and Aytolis armies at Aytolis’ dragon temple, Darios becomes disillusioned by his father's betrayal and begin to cast away his loyalty from his home kingdom.

Sometimes after recruiting most of every heroes from Awakening and Fates’ timelines. Darios got an information about what his father and Velezark up to, as the enemy armies led by their ruthless leaders will be gathered inside the Grisstone’s castle and planning to take over Aytolis completely. When Takumi and Ryoma questioned about Darios’ allegiance, Darios assures his allies that he maybe loyal to his home kingdom, it was his father who led their kingdom’s downfall. As Rowan, Lianna and Darios concerned about the safety of the Shield of Flames and the twins themselves, Darios objects his close friends’ ideas about him watching over the shield under his care, but reluctantly have no choice to do it.

During the the heroes' attack on a Gristonne fortress to restore his kingdom and removing his father King Oskar from his throne for his tyrannical allegiance with the villains across the universe and Velezark, Darios is trapped inside the castle and unable to escape from the enemies’ barrier, thus ended up being possessed by the spirit of the dragon Velezark before the heroes arrived and rescue Darios, and recover the Shield of Flames which was reluctantly under Darios’ hand. Because of Darios' unintentionally hidden lust for power and obsession to become stronger, Darios ended up becoming Velezark's perfect host, who corrupts his will. After all Gleamstones were gathered into the Shield of Flame, Velezark, using Darios' body, initiates its plan. It reveals itself as Oskar's co-conspirator and steals the Shield of Flames for their own evil purposes, and so the twins pursue him.

When they catch up to him, they find that Oskar and the Velezark-possessed Darios also have Yelena hostage. Oskar and Darios prepare to sacrifice Yelena to revive Velezark's full power, though Darios makes the proposal that if the twins surrender their weapons, he will spare her. When they do so, he turns to kill her anyways, but is stopped by Takumi, who predicted this outcome. The twins retrieve their weapons, and Rowan forces Darios back as Lianna rescues Yelena from the purple magic circle she was being held captive in.

With Yelena rescued, the twins attempt to get Darios back from Velezark's possession when Oskar approaches him. The possessed Darios reassures his father that the situation is under control before suddenly stabbing him in the stomach, saying that all he needed was royal blood. With Oskar as the sacrifice in Yelena's place, Oskar's body is absorbed by the magic circle to fuel Velezark's full power into Darios' body. During the battle against his fellow heroes, Darios manage to fight back Velezark from the inside for the heroes to defeat him.

After the twins defeat him, Darios fully regains control over himself and pleads for them to kill him before Velezark manifest itself from his body. They refuse to, and believing there must be another way to save Darios, but was too late. Velezark begins to separate from Darios' body, using the Gristonne prince's life force to materialize its body. Although Darios is freed from the dragon's possession, it is short-lived as Darios pushes the twins away from one of the dragon's attacks and is impaled by a sword. Using the last of his strength to return the Shield of Flames, the floor under him gives way and he crashes to the depths which shows a void of space-time below as the twins scream his name.

According to the developer’s interview, Darios’ fate confirmed to be unknown, when he fell to the void.

Throughout the majority of the story, Darios seems to be a brave and caring individual. In the times where he would visit Aytolis, he would teach Rowan swordplay and Lianna the academic arts, showing how much he cares for the twins and treats them as if they were his siblings. Darios also becomes disillusioned with the idea that his home country is responsible for all that is happening, but continues to fight for Aytolis.

During his time under Velezark's possession, Darios exhibits a completely different personality as power-hungry and desiring strength. Darios is also highly condescending toward the twins, as he mocks their attempt to awaken the Shield of Flames. He also holds all the other heroes to a similar low rank by calling them fools and mocking their failures, with the exception of Marth, but only because of his grudging respect for his "lofty rank" as the Hero-King. In addition, Darios remained loyal to Gristonne, though he entertains the notion of fighting against it for some time. However, it is possible that the vicious words and actions are actually Velezark's, since it is unclear to what extent Darios was possessed.

However, Darios struggled to contain the power of Velezark within him, and was willing to give up his life if it meant saving the world. Darios also blames himself for being "weak" and letting Velezark take control. In the end, Darios sacrifices himself for the sake of the twins, and asks for their forgiveness prior to his death, indicating true remorse for his actions.

Darios is illustrated in the trading card game Fire Emblem Cipher with the following cards: 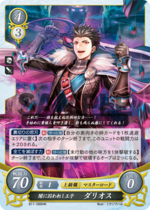 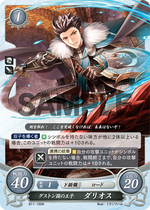