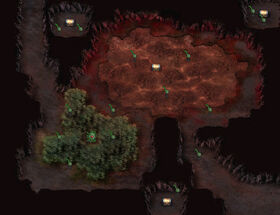 This is an indoor map aside from the forest, wherein mounted units are allowed to mount.

This map is very variable by the nature of the Opuses being capable of reproducing every turn. The Arch Opus on some turns will use its turn to spawn 1 to 4 smaller opuses, though they will never do this if the player is in its attack range. Every smaller Opus is capable of using their turn to spawn another one, though this will halve its current hp and the one it spawns will also have the same halved hp. They can still decide to do this even if a player unit is in attack range. The result of this is that the Opuses will likely reproduce a lot before the player can do anything about it, but most of them will have 1 hp or around that amount by turn 3 or 4. The problem of course is that there will still be a lot of them. Only the boss is required to kill as the objective is to get all chests, but usually you will need to kill all enemies anyway since the only chest openers cannot fight very well at 1 range.

An important thing to note is that mounted units can mount in the forest part of the map, but they will be forced to dismount before leaving it. This can be used to increase survival chance by a little due to the stats mounting gives. The forest is also notable for its avoid, since for many characters it will give them enough avoid to where the enemies ignore them, since enemies will tend to ignore player units that they have a 0% chance of hitting. However, the enemies still have variable stats so some can still decide to attack if this happens while others won't.