Chapter script
[view]
“Archanea: the largest kingdom in the continent. The palace: a golden capital proud of its six hundred years of history. However, under the attack of Altea’s allied forces, it fell in a mere day. The Archaneans welcomed them as liberators, supporting them without sparing efforts. All of them had bitter words about Hardin and his bodyguards, who were inside the castle. The people now called Hardin the Dark Emperor. A title symbolic of the people’s hatred for he who had killed so many. "I didn’t wish to fight, given the choice, but now that it’s come to this…" Marth raises Anri’s flag up high, issuing his final order. "Go, heroes of Altea! This is the final battle. All forces, charge into the palace!"”
—Opening Narration, New Mystery of the Emblem
“Saint Akaneia is the largest country on the continent. Its golden capital of Pales has bathed in 600 years of proud history. Under the attack of Aritia’s allied army, it fell in just one day. The citizens of Akaneia welcomed them as liberators, and supported them to their fullest. They also mentioned of their hatred towards Hardin and his personal guards. Everybody now calls Hardin the Dark Emperor. This was in hatred of Hardin, the murderer of countless people. If possible fighting would be avoided, but it has already reached this stage... Marth raises Anri’s flag up high, and orders his last command. Go, heroes of Aritia! This is the final battle. Everybody, charge into Pales castle!!”
—Opening Narration, Mystery of the Emblem

Dark Emperor is Chapter 20 in Book 2 of Fire Emblem: Mystery of the Emblem and its remake.

The Bad Ending occurs if the Starsphere, Lightsphere, Geosphere, Lifesphere, and Darksphere were not obtained by the end of this chapter. In this case, the game ends at Chapter 20 (unless Chapter 20x is unlocked, in which case the game ends after Chapter 20x).

If all five spheres were obtained, the Binding Shield will be restored and the True Ending will be achieved; after Chapter 20 ends, the game will continue until Chapter 24 (the Final Chapter).

New Mystery of the Emblem:

This Chapter is filled with powerful, high level promoted units wielding powerful weaponry and even features the first Earth Dragon the player faces in the game. There is also added challenge with the recruitable character Midia, whose low bases almost guarantee her death once the units surrounding her become aggressive (this happens when a playable unit gets close to the throne). Therefore, it is advisable to bring a Rescue staff to get her out of harm's way. The challenge is further increased by the 2 Bishops wielding Fortify staffs, which can heal many units almost fully and force the player to either kill the Bishops quickly before the enemies overwhelm them or kill every unit they fight in one turn. There are also Bishops with Swarm that can deal serious damage to most units, because the Resistance of most classes is very low. This chapter is made even more challenging by the reinforcements that spawn which are not only as strong as the initial enemies in this chapter, but they are also able to move instantly if you play on Hard/Maniac/Lunatic.

Another viable strategy is to use warp to warp your strongest unit in to one round kill Hardin and then warp Marth in to finish the level in a single turn, although that means losing out on exp and some items that are useful on higher difficulties, such as the brave weapons.

Note: Opening the door to the chest in the north part of the map makes enemies around Midia agressive as well and will make enemies spawn from the southeast.

Every turn starting at Turn 5, east of the starting point:

Once the dialogue between Hardin and Marth is triggered and on the second turn after that, from the room that has opened after the event: 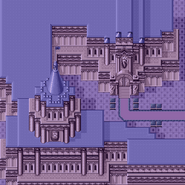