[view]
The Dark Flier is a class that debuted in Fire Emblem Awakening.

A Pegasus-mounted combat physical and magical class, it is one of the promoted forms of the Pegasus Knight class in Awakening and a DLC-exclusive class in Fates and Three Houses, the Dark Flier class wields Tomes and Lances as its weapons of choice.

In Fates, the Dark Flier class is renamed to Dark Falcon. In this title, the class is unisex and treated as Nohrian, requiring the use of DLC-exclusive Ebon Wings in order for characters to gain access to it.

The Dark Flier class makes a return in Three Houses as a DLC-exclusive class once again, as well returning to being female gender-locked. A character must be level 20 or higher to take the Certification Exam using an Abyssian Exam Pass. The recommended level requirements are B+ or higher in Reason and C or higher in Flying. The class gives bonuses to Reason, Flying, and Swords. 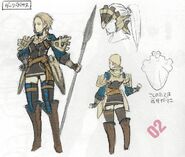 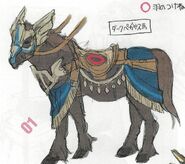 Concept art of a female Dark Falcon in Fates. 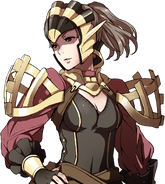 Generic class portrait of a Dark Flier from Awakening.