[view]
The Dark Knight (ダークナイト Dāku naito) is a horse-mounted combat magical class that is introduced in Fire Emblem Awakening. One of the promoted forms of the Dark Mage class, Dark Knights wield Tomes as their primary weapon of choice, and are also able to arm Swords as their secondary weapon.

In Fates, Dark Knights are treated as a Nohrian class, and again as one of the promoted forms of the Dark Mage class.

In Warriors, Dark Knight is the base class of Leo and is unable to use Swords, though their ability to do so is referenced in Leo's Dual Special, with him using his Iceblade. It promotes into Dark Crusader and is a clone of the Troubadour class.

Dark Knights are similar to Mage Knights, in the sense that their Magic is slightly higher than their Strength. When compared to their un-promoted forms, Dark Knights clearly have superior Movement, making them great for performing rescue missions. They do, however, suffer from the usual litany of weaknesses that are associated with mounted units, including limited range on sand-based skirmishes and sustaining bonus damage from Beast Killers. Compared to Sorcerers, Dark Knights are much more all-rounded but have poor Skill and Speed.

In Awakening, the first skill that Dark Knights are able to learn is Slow Burn. This skill improves their Hit Rate and Avoid by 1 point for each passing turn for fifteen turns. Given the subpar Skill of Dark Knights, Slow Burn can benefit them in the long run, but it has its limitations due to its potency taking time to build up. The skill is thus generally not very useful on lower difficulties. Lifetaker, conversely, is a regenerative skill that allows Dark Knights to recover half of their maximum HP upon successfully killing a foe. This skill is particularly useful when Dark Knights are low on HP; other units could weaken foes sufficiently for them to kill off, allowing them to replenish their HP without the aid of recovery items or Staves.

In Fates, the first skill learnt by Dark Knights has been replaced with Seal Magic. After battling (provided that both units survived), the target will lose 6 points of magic after battle. This makes the Dark Knight as an effective magic crippler, as it can chip off a decent amount of magic when stacked with other debuffs.

Their Hoshidan counterpart is the Basara class, as both are promotions of the Tome-wielding classes that allows them to use another weapon other than Tomes. Dark Knights have a bit more flexibility with tomes due to their A-rank proficiency and can cover more ground due to being a mounted unit. However, Basaras have more flexibility with lances and their stats are much more balanced.

In Three Houses, Dark Knights gain extra firepower and flexibility in the form of Black/Dark Tomefaire and Canto, at the cost of being much more difficult to promote into compared to previous entries in the series. This is due to the requisite A-Rank in the skill of Riding, which potential mages can earn by promoting into a riding class (such as Cavaliers, Paladins, etc.) or by tutoring. However, this is less than optimal, as there is only one lower-level magic-using cavalry class to efficiently build a unit's riding and reason rank, the Valkyrie, which on top of requiring the paid DLC and having a high requisite B-Rank in riding and Reason, is also female-exclusive. This makes it difficult for potential male Dark Knight candidates, such as Hubert, Sylvain, and Lorenz, to promote into the class.

Overall, Dark Knights form a rather useful class as a whole, performing well as a flexible offensive unit. Although they are not as magically proficient and somewhat slower compared to Sages and Sorcerers, their use of swords allows them to counter high resistance units. In Fates, this also keeps the Dark Knight from being a completely helpless unit when suffering from the effects of Snake Spirits, Dragon Spirits and Ginnungagap tomes.

The Dark Knight class generally takes on an ominous appearance that is closely intertwined with the overarching theme of death, replete with jet-black armour, headpieces with fearsome miens and horses with black coats. The masks donned by both incarnations of the class encapsulate the theme particularly well; in Awakening, the masks donned by Dark Knights carry designs inspired by Grima's face, while in Fates, the masks resemble actual human skulls.

Concept artwork of the male variant of the Dark Knight class. 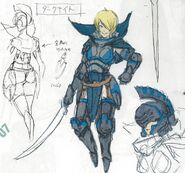 Concept artwork of the female variant of the Dark Knight class. 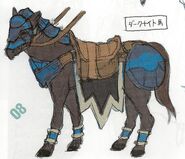 Concept art of a female Dark Knight from Fates

Concept art of a male Dark Knight from Fates 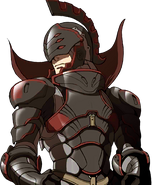 Portrait of the generic male Dark Knight from Awakening.

Portrait of the generic female Dark Knight from Awakening.

Battle model of Ricken, a male Dark Knight from Awakening. 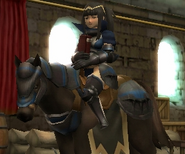 Battle model of Tharja, a female Dark Knight from Awakening. 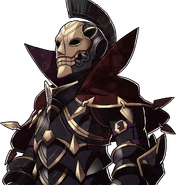 Generic class portrait of a Dark Knight from Fates.

Battle model of Leo, a male Dark Knight from Fates.

Sylvain as a Dark Knight in Three Houses.

In game model of Cain, a Dark Knight from Tokyo Mirage Sessions ♯FE.

Map sprite of the Dark Knight class from Awakening.