Hex (FE13 only)
Anathema (FE13 only)
Heartseeker (FE14 only)
Malefic Aura (FE14 only)
[view]
The Dark Mage (ダークマージ Dāku Māji) is a combat magical class that recurrently appears across the Fire Emblem Series. Wielding Dark magic as their primary weapon of choice, Dark Mages have exclusive access to dark magic spells such as Nosferatu and Mire in titles where all spells are collectively grouped under the Tome category.

Dark Mages usually have less Magic as compared to their Anima counterparts, but they compensate for this with their higher Defense. They commonly promote into Sorcerers in most games where they are available, and in the more recent 3DS installments, Dark Knights act as their alternate promotion option.

Dark Mages are considered to be the equivalent of the Shaman class from the GBA titles, as both are armed with Dark Magic for combat purposes.

The Dark Mage makes its debut to the series in Mystery of the Emblem, where it is an enemy-only variant of the Bishop class that is used by Gharnef and the priests of Dolhr in the later parts of Book 2.

Genealogy of the Holy War reintroduces the class as the primary wielders of enemy-only Dark Magic, with the Dark Bishop being its promoted equivalent.

In Thracia 776, the Dark Mage is made playable for the first time and is treated as a second-tier class that promotes from the Loptyrian Mage class. The class can also wield all forms of Anima magic as well, a feature that will remain with the class throughout the series from this point onwards.

TearRing Saga: Utna Heroes Saga returns the Dark Mage to an enemy-only class with the Dark Bishop class as the promoted equivalent; the player is granted access to Dark Magic through the Witch class instead.

The Dark Mage class is absent from the Elibe Series and The Sacred Stones, being replaced by the Shaman class.

In TearRing Saga: Berwick Saga, Dark Mages are associated with the Raze clergy and come in two varieties: the Raze Monk and the Raze Priest. The former is an enemy-only class that can only use Dark magic, whereas the latter can also use Fire, Wind, and Thunder magic and has a slightly different palette. Though Olwen is a High Priest, he has the ability to transform into a Raze Priest. If he's not permanently recruited, the transformation occurs automatically on turn 20, and he becomes an enemy unit for the rest of the battle. This limitation is removed once he's permanently recruited, giving him the ability to switch between his High Priest and Raze Priest forms at will, both under full player control.

The class makes its return to the main series in Shadow Dragon, where it promotes into Sorcerer. No unit starts as a Dark Mage by default, but Cord and Caesar are recommended reclass candidates, as they both have a 30% growth rate in Magic as Dark Mages, which is higher as compared to other candidates.

Dark Mage reappears in the sequel New Mystery of the Emblem. Like before, no playable unit is a dark mage by default but certain characters make good reclass candidates. Dark Mages now appear as enemies in the chapters taking place in desolate areas ruled by Barbarians and Dragons. Dark Mage enemies are replaced by their promoted counterpart, Sorcerer, in the last few chapters.

The class remains in Awakening and Fates, where they and the Sorcerer have the innate ability to wield Dark tomes alongside the standard Anima ones. The Dark Mage is also given the alternate promotion of Dark Knight, which removes Dark Magic access in exchange for a mount and Sword usage.

In Fates, the Dark Mage class is treated as a Nohrian class. Its Hoshidan counterpart is the Diviner.

In the spin-off Tokyo Mirage Sessions ♯FE, the Dark Mage Tharja from Awakening appears as the Mirage partner of Kiria Kurono. Tharja can promote into either a Sage or Sorcerer. The Dark Mage also appears as an enemy Mirage in Illusionary Daitama and is considered the weakest of enemies second only to the Blob Mirages.

In the spin-off Fire Emblem Warriors, the Dark Mage class is considered an infantry unit that uses Tomes. It is the base class of Tharja and, fittingly enough, acts as a clone of the Tactician class.

In Three Houses, The Dark Mage Class is an optional promoted class of the Commoner or Noble class for males only if the unit passes the Certification Exam at Lv. 10 with a Reason Skill Level of C or higher and a Dark Seal. The other option is the Mage class.

To match their name, Dark Mages are typically heavily cloaked and hooded to demonstrate their role as a mainly sinister-looking class that wields dark magics.

In Awakening, their clothes under their cloaks consist of revealing, tight clothing as well as black lace and sewn-in gold inspired off clothing used by priests from ancient civilizations. In place of a hood, they wear an additional dragon headpiece to show their allegiance to the Fell Dragon Grima and emphasize the fact that most (if not all) playable and enemy Dark Mages are from Plegia, whose culture and architecture is based off of ancient Egypt. This is further supported by the fact that male Dark Mages sport shendyts, an Egyptian skirt worn by men of that era.

Dark Mages from Fates are largely the same as Awakening although they now have a more European design, with a new clothed headdress replacing the Grima inspired one.

Dark Mages in Three Houses return to their heavily cloaked design from previous games, though now they don a crow mask to conceal their faces further. In most cases, dark mages are part of Those Who Slither in the Dark, a mysterious faction led by Thales that oppose the goddess.

*Olwen is a High Priest but can transform into a Raze Priest. 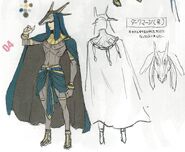 Concept artwork of the male Dark Mage class from Awakening.

The first set of concept artwork of the female Dark Mage class from Awakening.

The second set of concept artwork of the female variant of the Dark Mage class from Awakening.

Concept art of a male Dark Mage from Fates.

Concept art of a female Dark Mage from Fates.

A Level 1 generic Dark Mage, as he appears in the first series of the TCG.

A Level 10 generic Dark Mage, as he appears in the fifth series of the TCG.

Generic CG portrait of the Dark Mage class from Genealogy of the Holy War. 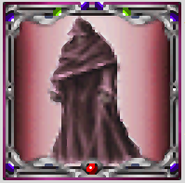 Generic CG portrait of the Dark Mage class from the DS titles. 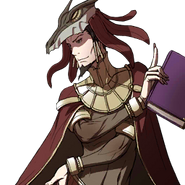 Generic portrait of the Dark Mage class from Awakening.

Battle model of the Dark Mage class from TearRing Saga. 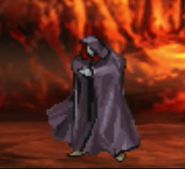 Battle model of the Raze Priest class from Berwick Saga 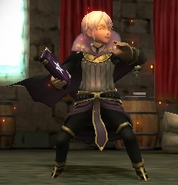 Battle model of Laurent, a male Dark Mage from Awakening. 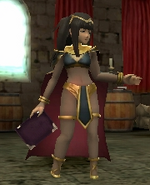 Battle model of Tharja, a female Dark Mage from Awakening. 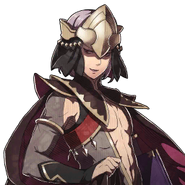 Generic class portrait of a Dark Mage from Fates. 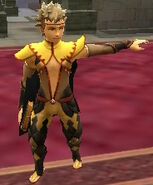 Battle model of Odin, a male Dark Mage from Fates.

Battle model of Nyx, a female Dark Mage from Fates. 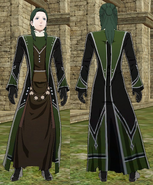 Map sprite of the Dark Mage class from Fire Emblem: Mystery of the Emblem.

Map sprite of the Dark Mage class from Fire Emblem: Genealogy of the Holy War.

Map sprite of the Dark Mage class from Fire Emblem: New Mystery of the Emblem.