Chapter script
[view]
“With the aid of the White Sage Gotoh's powerful Warp magic, Marth and company were transported to the faraway city of Thabes. Once, Thabes was an advanced civilization; but only its decay advanced now. The League traced the lifeless streets to the temple at the city's heart, somewhere within its walls Gharnef was waiting, and now, Marth must wrest Falchion and his sister, Elice, from the fiend's grip.”
—Opening Narration 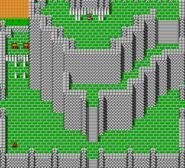