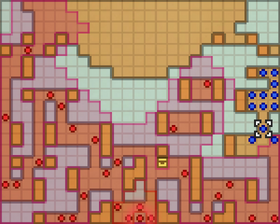 Have the Avatar escape

Kaden (Automatic at start of Chapter)

Chapter script
[view]
“Having narrowly survived a vicious attack at sea. The Avatar arrives at the port city of Cyrkensia. A chance encounter offers the group an unexpected opportunity.”
—Opening Narration

Dark Reunion (楽園の再開 Rakuen no saikai Reunion in Paradise in the Japanese version) is Chapter 12 of Fire Emblem Fates in the Birthright Version. This chapter takes place in the Opera House.

The objective is to have the Avatar escape through a secret area in the top central area of the map. There are three main approaches to achieve this end. The fastest way to do this is by bringing a flying unit, have the Avatar pair up with the flying unit, and move towards the escape zone. Using this method, you can end the chapter almost immediately, but you will miss out on a Dracoshield and a Hammer, though you can rectify this by killing the nearby Great Knight and having a flying unit accompanied by a unit with either a Chest Key or the skill, Locktouch, to loot the chest.

Alternatively, you can fight your way to the chest on foot and establish a choke point. In addition, the player will be swarmed by an army of similar strength which can make it extremely hard even when using a choke point to funnel incoming enemies due to the heavy defense of both the Knights and Great Knights in the area.

On Normal mode, Xander and his retainers, Laslow and Peri, will only move if a player unit is within range. On Hard and Lunatic, they will head immediately towards the Avatar. This allows the player to manipulate their movement with a flier and give the other units time to fight the enemy soldiers for experience. If you wish to fight Xander rather than escape quickly, you may want to complete Caeldori's paralogue before starting this chapter, so that you can have a Swordcatcher for effective damage.

Garon also appears on this map, although he is just a showcase as he does not move at all. Both his stats and his weapon, Bölverk, can easily destroy your units if they battle him. However, if you have an extremely competent scroll user with moderately high defense, it is possible to kill Garon. Using debuff staves such as the Hexing Rod, Freeze, or Enfeeble can make the battle easier. Ninjas can also weaken him further with their weapons, and they can safely approach him if paired with full shield meters. It is also recommended to bring a Falcon Knight as they can both use Staves and can use the skill Rally Speed. A level 25+ Azura is also recommended as Inspiring Song can raise Speed, Skill, and Luck by 3 as well as Voice of Peace as it is similar Sakura's personal skill. If you attempt this, you must not attack during the player phase unless prepared to kill him by the end of the turn; only entering Garon's attack range every 4 turns can negate his skill Draconic Hex. Even if he is defeated, he simply retreats and the story is not impacted in any way.

Another strategy is to attempt a one-turn K.O. on Garon. After clearing the map of all other enemy units and activating the Dragon Vein, use a Hexing Rod to halve Garon's HP and an Enfeeble to make the fight a little easier. By activating the Dragon Vein, support units like Felicia and Azama can spread their skill's aura such as Demoiselle and Rally Luck respectively, to more allies. Alternatively, players can choose to use parts of this method concurrently with the strategy listed above. Support units should not heal weakened allies; instead they should focus on debuffing Garon/buffing allies if you are attempting to one-turn K.O.

Be sure to have at least one other unit alive when bringing the Avatar to the exit square, as you will fail the mission otherwise.