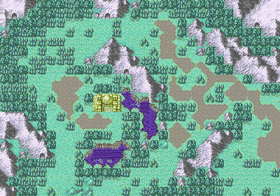 Chapter script
[view]
“According to legend, the Sacred Stones have sealed evil away from the world. Four of the five stones have been destroyed, leaving only the last stone intact. The last stone must be protected to stave off the Demon King's restoration. Eirika/Ephraim and company challenge the demons of Darkling Woods. According to legend, the original possessors of the Sacred Stones defeated the Demon King in Darkling Woods. His foul blood seeped into the land, corrupting every seed and every root. The once-pristine forest was transformed by the flood of disease and venom. Legend says the Demon King's corpse lies there still, not dead but dreaming. Dreaming of when the last stone is crushed, and he will rise from his bed of rocks and worms and return to the surface. Within Darkling Woods, hideous fiends roam in increasing numbers, as if responding to some unheard call...”
—Opening Narration

Darkling Woods is Chapter 20 of Fire Emblem: The Sacred Stones. It is the penultimate chapter.

This chapter should not be too difficult if you trained your units properly. Due to mountains in the west blocking mounted units, all aerial units in your squad should head west (make sure there is not just one!), and all non-aerial units head north. While heading north, you will be barraged with several reinforcements until turn 29, so proceed while killing off the several monsters that come at you. Due to your unit's higher avoid ratings, they should not have troubles killing enemies, unless your characters split widely apart from each other.

Be careful when proceeding, as there is an Arch Mogall that possesses Shadowshot in the western part of the map. If possible, use units with high res to wear down the usage of them, or kill the Mogalls before they attack you with the Shadowshot.

However, in the west, it is a bit more risky. Make sure one of your aerial units has a Fili Shield so he/she can ward off any bow users that are potentially nearby. Also, make sure your aerial units stick together, since none of them can wield staves, and vulneraries only heal 10 HP. Aside from that, killing monsters should overall be relatively easy due to your units' high avoid ratings.

Once your two squadrons reach the rendezvous point east of the Black Temple, it is time to attack the bosses, Riev first. Attack him with falcoknights and or an anima user that has enough luck to cancel the critical rating, and yet can survive a shot or two at most. Since he has naturally low speed (not to mention Aura's high weight), he should collapse in, at most, two turns. Be aware that monsters might still attack your troops when fighting the bosses.

Moving on to Morva, do not use Myrrh to attack him, as her low HP can enable him to kill her in just one turn. Instead, use stronger, more durable units who can survive a shot or two from his attacks, like a Berserker or Great Knight. Be sure they are armed with a sacred weapon, like Garm or Vidofnir, to make the fight quicker and easier. Since at this point you will probably have a couple of Physic staves in your possession, you should have no problem healing without harm. After a few turns of healing your bulky attackers, he should die. All you need to do next, is to let Eirika or Ephraim seize the Gate.

If you do not want to fight Morva, you can, provided that you have a staff user with high-enough magic, use the Berserk to move him out of his place.