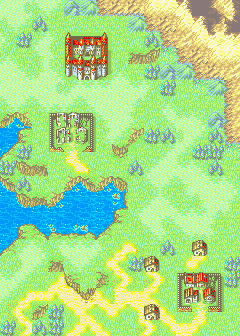 Chapter script
[view]
“The continent of Elibe. With the Dragons defeated in the Scouring, the unchallenged race of men had flourished and spread civilization throughout the land for the past millennium.
In the west lay the beautiful Kingdom of Etruria, the most developed nation in Elibe with an appreciation for the arts.
In the east lay the mighty Kingdom of Bern, a land of military prowess that boasted the continent's strongest army.
These were the two largest nations in Elibe, and the smaller powers were scattered between them.
Just to west of Bern was the Lycia Alliance, a peaceful land under joint rulership of various marquises.
The people of the Knights' Union of Ilia were hard at work cultivating the snowy wastelands in the north.
In Sacae lived various tribal clans which rode through the plains on horseback.
Despite the occasional clash between nations, there was enough balance of power to ensure peace in Elibe.
However, no peace can last forever.
Under the command of King Zephiel, the Kingdom of Bern suddenly began to dispatch its forces and attack the rest of Elibe.
Taken by surprise, Sacae and Ilia were quickly overrun, and those who resisted were mercilessly put to death.
It wasn't long before Bern turned its attention to Lycia as well.
In the east of Lycia lay the territory of Pherae. Roy, son of Lord Eliwood, Marquess Pherae, was studying to become the region's next leader in the great Lycian city of Ostia.
However, Eliwood, who had fallen ill, sent for Roy to return home. Just a few days earlier, Lilina, the daughter of Eliwood's best friend, Lord Hector of Ostia, had traveled to Pherae to pay her respects to Eliwood.
After getting his father's message, Roy hurried home, taking with him his loyal knights and Bors, a knight from Ostia responsible for Lilina's safety.
The story begins when Roy had reached an area just on the outskirts of Pherae...”
—Opening Narration

Dawn of Destiny (運命の息吹 Unmei no ibuki) is Chapter 1 of Fire Emblem: The Binding Blade.

The Chapter begins with the explanation of where the story takes place and with the background information cited at the beginning of the game. It then speaks of Roy, the game's protagonist, returning to Pherae, and that's where the story begins.

Before the battle, a group of bandits converge on Castle Pherae. They intend to take advantage of the absence of most of Pherae's military, who were off involved in the growing conflict with the country of Bern.

The Bandits from Bolm Mountain plan to raid the Castle, but before attacking it decide on raiding the nearby villages first. As they do this, Roy and company approach from the south-west, and Lance rides out from Castle Pherae to inform them of the current situation. After informing Roy's group of the attacking bandits, the chapter's battle ensues.

The battle in Chapter 1: Dawn Of Destiny takes place in the grounds surrounding Castle Pherae and the nearby villages.

In the mid-left of the map, above the player's deployment area, is a large lake that prevents movement straight northward towards the Castle. However, the lake also prevents the quick advance of the bandits on the position of Roy's group. The lake is effectively impassible, as neither side has any units capable of traversing water terrain.

Two villages exist on the map, although the village to the north near Castle Pherae is destroyed before the battle in order to demonstrate bandits' ability to reduce villages to simple ruins. The second village however, lays in the south-east corner of the map and is easily accessible within two or three turns. If the player visits the village, they will receive 5000 gold to spend later.

Also to the south-west area is a small collection of three houses. These houses will only give the player a few pieces of advice, but if a character attacks or is attacked while standing on a house-space, they will receive a small terrain bonus.

As far as other pieces of terrain, there is the ruins of the village that was in the north near castle Pherae. Also, there are a few forested spots across the map which will add a bonus to any unit standing on them while they attack or defend. Also, a few mountains lay across the northern area of the map along with a few peaks, although they will likely never come into play.

For those whose only experience with Fire Emblem is the versions released worldwide, this level and the rest of the game, will prove to be a challenge. For starters, you will be rushed by a group of Axe fighters and will have to advance slowly because of them. Secondly, and most important, the boss character can still land a hit even at 40-something accuracy, as can other enemy units/bosses in the game.

To wade through the ocean of brutes at the beginning of the level, the player can create a blockade using the bottom of the lake and the small cliff-face near the player's deployment area.

Marcus, however, can make himself useful by visiting the south-eastern village while the others battle the bandits. One can also trade his Iron Sword to Roy so as to not waste his starting Rapier.

Most of the battle, however, can be easily won simply by slowly advancing forward, crushing any resistance that meets the frontline. Wolt, being a ranged attacker, will be useful in doing easy damage to enemy units. As for the boss, Wolt can easily pick slowly at his Hit Points while gaining some nice experience points, as the Boss will not move from the Castle Gate.

**However, for Hard Mode, it will be recommended to not use Archers/Nomads, since they have quite a few disadvantages and is much harder than Normal Mode, which is already difficult for novices.

The first disadvantage is that there are many enemy units who use Hand Axes and Javelins, which means they can be counterattacked and limits their usefulness. (Don't you want to attack without fear of counterattack? You need every advantage you can get...)

Second, those units with Hand Axes and Javelins can attack from 1 or 2 spaces away, something Archers/Nomads can't do.

Third, Magic users can attack from 1 to 2 spaces away as well and fourth, the Archers/Nomads aren't known for having the highest Resistance.

Fifth, enemy units can have average defense, across the board, and since Archers/Nomads attack using Physical means, well, the attack will be subtracted from the defense.

Sixth, there are not that many Ballistae, which would make them more useful and seventh, they are always manned and you will probably not be able to get to them with all the arrows intact. Therefore, limit your use of them to give the experience points to everyone else!**