Leader of the Kutolah Tribe

Chapter 20B: The Silver Wolf

Nomad Trooper
[view]
“We Sacaeans pray to the Sky and the Earth. The light of day and the darkness of night that engulfs this land... They produce wind, lightning, fire, ice, and many other affinities... Every person on this planet is protected by one of the elements. According to my clan's beliefs, I am protected by the Anima affinity.”
—Dayan to Yoder, in a support conversation

Dayan is a playable character in Fire Emblem: The Binding Blade. He is the legendary Silver Wolf of the Sacae Plains and Roy, Sue, or Sin can recruit him on the Sacae route.

Leader of the Liberation Army, he tries to free Sacae from the double threat of Bern soldiers and Sacaen traitors; he cannot hold back his enemies and despite the elimination of his clan, proceeds to weaken them by guerrilla actions.

Description: Known as the Silver Wolf. Chieftain of the Kutolah clan.

While Dayan has good bases and great weapon ranks, his main selling point is that he joins right before chapter 21, and he is one of the few units who can reliably one-round the powerful Wyvern Lords with a Silver Bow, and pretty much the only one who can do so without any investment. His 20 Speed allows him to reliably double most enemies at base. Less notable, but still worth mentioning is his base C rank in swords, which allows him to wield weapons such as Steel swords, Wyrmslayers (very useful during enemy phase of Chapters 21 and 23) and Killing Edges at base, so he isn't locked to 2 range if need be.

Dayan's only real issue is the fact that he and Juno cannot be used at the same time. Both are incredible ferry bots, and both are 8 movement units. The main difference is Dayan has good combat while Juno has flier utility. It comes down to preference of Sin/Sue vs. Shanna/Thea for which one you'll recruit and preference on which route you'd like to go. But all the same, both are extremely useful units in their own rights.

Dayan - Silver Wolf (灰色の狼, Haiiro no Ōkami lit. Grey Wolf)
"Dayan built a new clan centering around his remaining Kutolah brothers. His quest did not go without oppression, but he used his perseverance and leadership to create harmony and lead the clan to become the greatest in Sacae."

Dayan is illustrated in the trading card game Fire Emblem Cipher with the following cards: 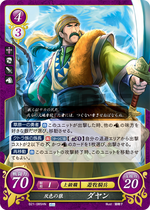 Dayan's name is most likely a reference to Dayan Khan, a descendant of Kublai Khan who ended Oirat domination over Mongolia and reunited the Mongols under the Northern Yuan dynasty. Furthermore, the title "Silver Wolf" bare similarities to the title "Gray Wolf"; a title Genghis Kahn is known for.

Artwork of Dayan in Fire Emblem 0 (Cipher) by Nekobayashi.

Dayan as a Nomadic Trooper in Fire Emblem 0 (Cipher).