Dragon Knight
[view]
“Dean rescued me from that nightmare. He protected me from assassins from the Empire, and always cheered me up when I was about to break down. He always laughed it off, but I was sure he was a well-known mercenary. I never knew he was working under Lord Arion...”
—Linoan talking about Dean

Dean is a playable character from Fire Emblem: Thracia 776. He is a 27-year-old Dragon Knight from Thracia who is tasked to protect Linoan of Tahra. Dean is also the older brother of Eda.

Years prior to the events of Thracia 776, Dean received orders to protect Prince Arion fiancée, Duchess Linoan of Tahra. To fulfil the commands of his prince, Dean left the Thracian army.

Dean later rescued Linoan from the captivity of the Grannvale Empire, thereafter working to protect her from the many assassins hired by the Empire. At the same time, it was in working closely with Linoan that Dean fell in love with her. Although Linoan shared the same feelings for Dean, the pair never marry as Dean chose to uphold his loyalty to Prince Arion.

Dean first appears in Chapter 13, where he, Glade, and Eda survey the dire circumstances of Tahra's invasion and discuss what to do to continue its defense. When Eda recklessly offers to engage the enemy alone, he stops her, explaining that she will make a perfect target for the ballistae before imparting the hit-and-run tactics of dragon riders.

While the Empire is poised to launch a full-scale attack on Tahra in Chapter 14, Linoan shares a conversation with Eda, where it is revealed that Dean is not present for the pre-battle meeting due to being uncomfortable in such formal settings. Dean can visit the southwestern house in this chapter, where he will meet with Princess Altena. Here, she bestows the Dragonpike on him, informing him that it is a gift from Arion to help him better protect Linoan from harm.

The battle in Tahra ends with Arion entering the scene to convince Linoan to stand down. Choosing to stay with Leif's army, she retreats with it, and Dean accompanies her. The retreat itself takes place in Chapter 14x, and should Linoan be killed or captured at this point, Dean will leave Leif's army and return to Thracia.

Dean then goes on to continue supporting Leif in his cause to liberate Northern Thracia from the Grannvale Empire. When Manster is finally recaptured by Leif in the Final Chapter, he informs Linoan that he can no longer accompany her, choosing instead to return to Thracia. In a state of frenzied panic, Linoan tries to stop him, and although Dean chastises her for being childish, he chooses to remain at her side for the time being.

Dean eventually returns to Southern Thracia with an injured Arion in tow. He later emerges as the commander of the New Kingdom of Thracia's Dragon Knights.

Portrayed as stalwartly loyal to his liege Prince Arion, Dean is unwavering in his commitment to his prescribed duty of protecting Linoan. Even when he and Linoan fall in love with each other, he chooses to ignore the callings of his heart, prioritising his duties over his feelings.

Dean is not entirely able to ignore his feelings, however. In response to Linoan's outburst of panic at the thought of him leaving her side in the Final Chapter, he is clearly stricken by distress as well, doubting the wisdom of his decision. This ultimately leads to him deciding to remain with Linoan for as long as can, even though he is no longer bound by duty to do so.

Dean is a highly competent combatant right from the moment he joins, able to strike down enemies with the Dragonpike with ease, which works like a Brave Lance and also gives him the Vantage skill. He does not start off with good bases, but he has excellent growths, which will help immensely as he gains levels.

Furthermore, Dean's 2 Movement stars help him by giving him a high chance to move again. This pairs well with his high PCC of 3, which helps him land Critical Hits more frequently to increase his damage output. As a flying unit, Dean is also able to effectively taxi his allies around outdoor maps.

Dean's only real disadvantage is the fact that Dragon Masters suffer from the largest stat-losses indoors when they dismount. Dean makes up for this with a superb Sword rank of A, allowing him to continue functioning as a decent combatant even when dismounted.

Dean: The full-scale attack has begun... Well, what do we do, Glade?
Glade: We're far outnumbered. Our defeat will only be a matter of time.
Eda: Shall I go derange the enemy lines? It should buy some time for us.
Dean: No, that won't do. The enemies have ballistas. You'll just be a perfect target if you go out alone. The basics of fighting from dragon-back are to run in for a surprise hit, and then immediately retreat. You must never rush, Eda.
Eda: Yes, my brother.
Glade: I will send out my knights.
Dean: Will that be enough? The mercenaries all fled.
Glade: Hm... What about Prince Shannan? If he is a direct descendant of the Sword Saint Od, he must have power far greater than ours. Why does he refuse to help?
Dean: Oh...him. He apparently has no interest in battles in lower places.
Glade: Hmph, and he spends his time playing with the women, eh? ...We have no choice. We will have to fight on our own.
Dean: Be careful. This is only the beginning. ...The worst still has yet to come.
Glade: I know.

Woman: Oh, Dean... Lady Altena is waiting for you.
Altena: Hello, Dean. I'm glad you seem well.
Dean: Lady Altena!? What are you doing here?
Altena: You haven't changed, have you, Dean? I came all this way to give you this spear.
Dean: Spear...? But...this is Lord Arion's Dragonpike...
Altena: He wants you to use it. He was saying that it is his apology to you for making you a traitor.
Dean: It was me who chose to leave the army. I appreciate the offer, but I can't take this.
Altena: Dean, don't step on my brother's kindness. If you won't take it, I will order you as the queen of Thracia.
Dean: Haha... I'm no longer a knight of Thracia... But very well. I can't go against Lady Altena's orders. I will take this Dragonpike for now.
Altena: Good... Dean, protect Linoan with that spear. Linoan and my brother are to be wed... I'm sure Arion would have liked to protect her himself, but he can't leave the country for very long. I think that's why he gave the spear to you.
Dean: ...I think you've misunderstood, Lady Altena... Please don't worry about Lady Linoan. I will protect her in place of Lord Arion!

Dean - The Hero of the Skies (蒼き天空の勇者 Aoki tenkū no yūsha)

After the war, Dean accompanied the injured Arion to Southern Thracia. It was another several years before Dean emerged again as the commander of the New Kingdom of Thracia's Dragon Knights.

Dean is illustrated in the trading card game with the following cards: 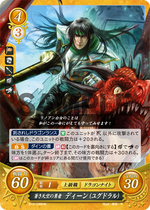 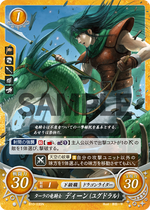 An illustration of Dean and Eda in the Thracia 776 Picture Postcard.

Dean's portrait in Thracia 776.
Add a photo to this gallery