Varies
[view]
Death (デス Desu) is a Black Magic spell from Fire Emblem Gaiden and a Dark magic spell from TearRing Saga: Utna Heroes Saga. Death is a powerful spell often used by high leveled Dark Magic users, but despite what the name implies, it is not an instant death spell.

In Fire Emblem Gaiden, Death boasts high might at the cost of lower accuracy. In TearRing Saga, Death has lower might than other Dark Magic spells, but has a high critical rate. 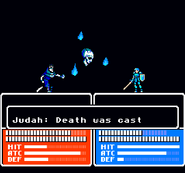 Artwork of the scroll of Death in TearRing Saga: Utna Heroes Saga.