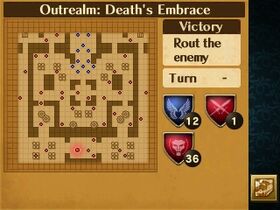 Rout the Enemy
Defeat Algol in 10 Turns (To recruit Est)

Est from the Outrealm (defeat Algol within 10 Turns)

Algol
Risen Chief (only if Algol flees the map)

Chapter script
[view]
“Deep within an underground temple in the Other World, foul sorcerers have created strange and unnatural soldiers.”
—Opening Narration

Death's Embrace (Border Between Life and Death in the Japanese version) is Xenologue 19 of Fire Emblem Awakening. This chapter takes place in the Outrealms.

This map is geared towards expert players, pitting them against a floor of dangerous tiles that reduce the HP of friendly and enemy units alike to 1 at the start of the player's turn.

Immediately set up two healers with high magic to use Fortify staves to recover the health of your units quickly. Try to have Galeforce users rush to the sides, since there is considerably less resistance there. The first priority is to take out the Sorcerer left of Chrom's starting position, as it has a Mire tome. Take out the other units carefully as possible. Enemy reinforcements should also be taken care of, as they appear on the start of the enemy's turn.

Most of the enemies are relatively simple to defeat, though you should be wary of the Berserkers, Sorcerers and Assassins on spiked tiles, since they will get 39 additional damage if they activate Vengeance. The enemies also carry one or two weaponbreaker skills (most units will have Swordbreaker, the Sorcerers just have Bowbreaker and the Heroes come with Axe/Bowbreaker).

If you want to recruit Est, take out Algol before turn 10; otherwise he will flee. Algol is relatively simple to kill; you can either Mire him from the healtile, or aggro him out by placing a unit in his range. The remaining enemies can be dispatched of normally.