Canto, Lancefaire
[view]
The Death Knight is a character-exclusive Class that first appears in Fire Emblem: Three Houses. It is the unique class of a character whose true identity is hidden.

The Death Knight is functionally similar to the Dark Knight, bearing a proficiency for Lances, Reason, and Riding. As an enemy, the Reason affinity of this class ultimately goes unused as the Death Knight solely uses Lances, namely his Scythe of Sariel as his primary weapon. Should he be defeated by Caspar in the paralogue The Face Beneath, he will instead wield a generic Brave Lance.

As of Update 1.1.0, the Death Knight class is made playable, as a Unique class for Jeritza in the Crimson Flower route. The class itself plays like a melee-oriented version of the Dark Knight, as the Class Abilities it has are Canto and replaces both Black and Dark Tomefaire for Lancefaire, with no other Class abilities. The class also sacrifices its 5% growths in Strength and Charm for a 20% growth in HP, rather than 10%. That being said, Death Knight does have one thing going for it that sets it apart from Dark Knight: its Mastery Skill, which is Counterattack, which makes Jeritza a threat at all distances. 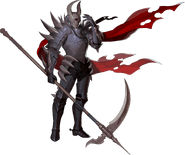 Artwork of the Death Knight from Three Houses 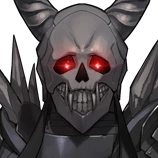 Artwork of the Death Knight from Fire Emblem Heroes by Yamao

Jeritza as the unmasked Death Knight.
"End of spoilers. It's a pleasure doing business with you!"