None
[view]
“Gargoyles enhanced by magic. They surpass their lesser brethren in speed and brutality.”
—In-game description from Fire Emblem: The Sacred Stones.

Deathgoyle (デスガーゴイル Desugāgoiru, lit. Death Gargoyle) is an enemy-only Monster class that debuts in Fire Emblem Gaiden. Stronger versions of the Gargoyle class that are empowered by dark magic, Deathgoyles either wield scythes or Lances as their weapon of choice. Deathgoyles are considered to be Flying Units, and are thus vulnerable to Bows and Wind Magic.

In its original inception in Gaiden, the Deathgoyle class is known as the Balrog (バルログ Barurogu). The promoted form of the Gargoyle class, Balrogs swoop into battle wielding scythes to slice their foes. Only one of these monsters is encountered throughout the course of the game.

In The Sacred Stones, the Deathgoyle class is also the promoted form of the Gargoyle class. This version of the class adopts a purple colour scheme to distinguish them from their unpromoted counterparts, and similarly wield Lances as their weapon of choice.

In The Sacred Stones, Deathgoyles are not particularly common enemies.

These brutal monsters excel in both Strength and Speed, having moderately defense and moderately high health.

Deathgoyles, like their unpromoted counterparts, exclusively use Lances for battle. The same tactics against Gargoyles can be used against Deathgoyles, such as using an axe or Lancereaver wielding unit. Bows can also make short work of these flying foes, as they are extremely weak against them.

The Balrog is a fictional creature from J. R. R. Tolkien's fantasy series The Silmarillion and The Lord of The Rings. Balrogs are Maiar who were seduced and corrupted by Melkor into his service. There were seven in total, led by Gothmog. Durin's Bane is the Balrog featured in The Lord of the Rings: The Fellowship of the Ring.

The term "Deathgoyle" is a portmanteau of the words "death" and "gargoyle". This name fits the class quite well, given the fact that Deathgoyles are modeled to be the harbingers of death, both in terms of appearance and function.

Generic class portrait of a Deathgoyle from The Sacred Stones. 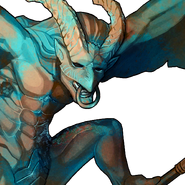 Generic class portrait of a Deathgoyle from Echoes: Shadows of Valentia. 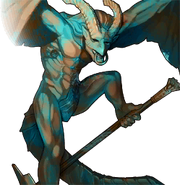 Generic class portrait of a Deathgoyle from Echoes: Shadows of Valentia.

Village sprite of a Deathgoyle from Echoes: Shadows of Valentia.

Battle model of the Balrog class from Gaiden.

Attack animation of the Deathgoyle class from The Sacred Stones.

Map sprite of the Balrog class from Gaiden.